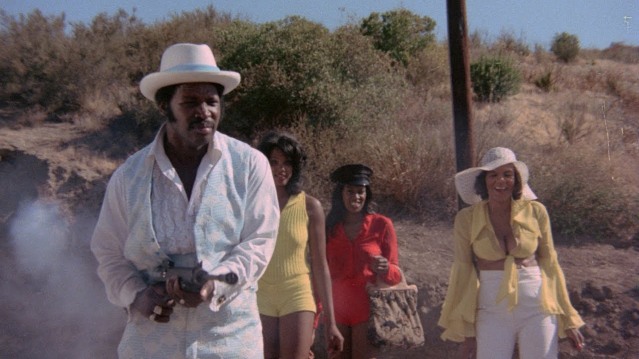 “Dolemite” really is like if Ed Wood tried to make a Blaxploitation movie – a pimp, drug-dealing, comedian, kung-fu master tries to make a living in Hollywood despite the police and FBI constantly on his backs and an evil drug dealer trying to take his club and brothel, and there’s also a plot about arming a crazy priest for war in there too. The production values are non-existent, a lot of shots going on for about a minute longer than they need to, many pointless shots of kids playing in the parking lot or a long subplot involving a heroine addict, and a level of incompetent filmmaking that even a child could pick up on, like the boom mic in a lot of shots or the reflection of the camera man in every window (and there’s a lot of them). And then there’s our lead, Rudy Ray Moore, who fights everyone like he was Bruce Lee without ever actually landing a punch with the physique of someone who really loves his sweets.

And yet, despite all of these flaws, there’s an undeniable charm to “Dolemite.”

The film knows that it is not good and doesn’t care. What it does care about is making something for those wouldn’t normally be up on the big screen – the faces that aren’t instantly recognizable or the bodies that wouldn’t get a second glance. “Dolemite” is made by those people, for those people, giving they can look up to just like anyone else should be able to when they go to the movies. The inexperience behind the screen gives “Dolemite” an honesty that is both hilarious and oddly likable, like anyone learning a new craft with all of their bold visions of what they’d like to do. This film throws everything that it can at you – kung fu, gang violence, sex, comedy, car chases. It rarely sticks, but more than anything else with this movie, it’s all about the attempt.