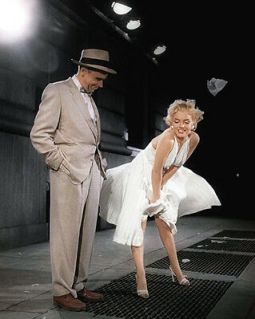 I don’t know why I would ever doubt Billy Wilder. Despite this not being mentioned on many of his best films list, “The Seven Year Itch” is still just as vibrant, witty, satirical and sexually charged as all of his comedies. It is raunchy without ever needing to be censored, funny while only needing two key performers (Tom Ewell and Marilyn Monroe), and its due to Wilder’s brilliance of turning a phrase like no one ever could and impeccable comedic timing.

The idea of pairing up a lonely but married man with the most vivid imagination with…well, Marilyn Monroe leads to some of the most creative, bizarre comedy to ever come out of the 50s. It certainly helps that Monroe gives the best performance of her career here, as well as the best outfits she ever got to wear, including the famous subway-grate dress. Ewell constantly going over the top and over-thinking every little detail is paired so well with Monroe’s simple, dim-witted approach that it sets the standard for many romantic comedies to come.