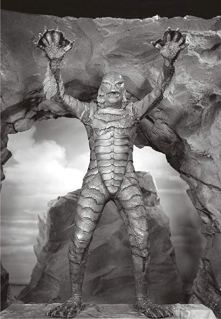 It is fascinating to watch “Creature from the Black Lagoon” with the knowledge I have now, so many years after falling in love with movies like “Godzilla” and “The Shape of Water.” Like many people, it is hard not to sympathize with the Gill Man as he defends his home from us, the invaders, and tries desperately to find love. He certainly is the most interesting character throughout the film, as every other character fills the generic monster movie tropes, including the macho hero (Richard Carlson), the greedy corporate leader (Richard Denning), and the helpless beautiful damesel in distress (Julie Adams), though it might help that the Gill Man has one of the best monster costumes ever made and is shown how dangerous he can be underwater with some rather beautiful underwater cinematography.

Though one thing I found distracting throughout the film was the music, since the same theme for the Gill Man would be used many times in “King Kong vs. Godzilla.” Every time I heard his theme, I expected King Kong to show up and destroy a building. Still, I can see why “Creature from the Black Lagoon” has attained cult classic status – it is the right amount of campy monster goodness with seriousness, mixed with some great cinematography and an icon monster that may not really be a monster.