“Goke, Body Snatcher From Hell” intrigues me more than it entertains me. The film follows the survivors of a commercial plane crash (after a supposed bomb threat). As we learn more about the survivors, including one of the passengers being the assassin of a recent deceased politician, they learn they were followed by an alien spaceship, helmed by blob-like goo who possesses the assassin and goes on a rampage, trying to suck the blood of all the survivors.

But what’s more fascinating is “Goke”‘s view on the world – political assassinations, the Vietnam War, pollution at an all time high, greed and ignorance causing men to turn a blind eye to all the horrors being committed. In the filmmaker’s eyes, the world is hell and we’re probably better off by having aliens come to end our suffering. 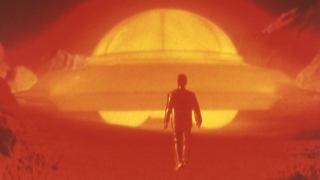 “Goke, Body Snatcher From Hell” is a Japanese horror film released in 1968, during the height of Japan’s special effects boom, in particular the daikajiu genre and the Godzilla films. While I wouldn’t describe this as a kaiju movie, it does seem like a direct response to Ishiro Honda’s uplifting, positive Godzilla films. In those movies, mankind often puts their problems and differences aside to help solve a much bigger crisis, and emphasizes that we’re all one people and should identify by that rather than our nations. But “Goke” almost seems insulted by that philosophy, and instead shows that mankind will never truly be at peace, as long as we remain prejudice and fearful of others, as shown by our numerous characters and their own pride or paranoia getting the best of them. And rather than mankind triumphing over evil aliens in Honda’s movies, the aliens take advantage of evil mankind to conquer our world.

As someone who worships the Honda Godzilla films, I’m intrigued to see such a dramatically opposing view point. More than anything else, at least “Goke, Body Snatcher From Hell” makes for a fascinating companion piece to the Godzilla films at the time.