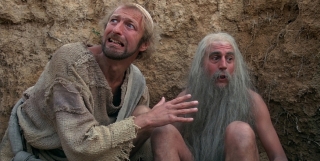 “Monty Python’s Life of Brian” just might be the most poignant satire of all time. The film is as enriching as it is hilarious, never attacking anyone’s virtue and always with good cheer and irreverence. Even if you’ve never cared for Monty Python’s style of comedy, there are so many insane jokes over insane people that every funny bone will be tickled by “Life of Brian.”

As a satire about the story of Jesus Christ and the man, Brian, that people commonly mistake him for, it is a nonstop assault of logic, perspective and parodies. Yet at its core, there is a strange warmth in its struggles to find inner peace for Brian in the face of all those that oppose him. The stand out of Brian speaking to his “disiplces” to try and reason with them and show that doing what other people force on you will never lead to happiness is both touching and uproarious. This is the kind of movie that only Monty Python could pull off so wonderfully – undeniably ambitious and foul, yet also cheerful and insane.