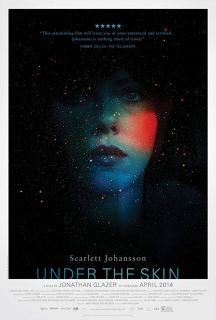 Independent movies often feel like the closest cinematic attempts at art – films that are less concerned with dazzling or thrilling audiences, and more focuses on making them think, showing life or society or the human condition from an angle that would be otherwise impossible. As such, I think it’s fair to give independent movies a bit more patience and understanding than a big-budget blockbuster as it develops these foreign concepts right before our eyes.

But that patience does have its limits. And “Under the Skin” crossed that limit multiple times over.

To say that “Under the Skin” is slow would be an understatement. The film moves at a painful pace, where I’m convinced that the filmmakers were testing the audience to see if they’d walk out of the theater after so little happened. It was more enjoyable to listen to a ticking clock than it was to watch an alien interact with humanity at a slow pace than slow motion.

Granted, I was onboard with the movie for the first 40 minutes or so, trying to piece together why Scarlett Johansson is luring men with her charms into a black abyss where they’re consumed and Scarlett does the same thing many times, with varying degrees of success. There is very little dialogue and lots of scenes of Scarlett staring off into space while she tries to understand “the human.” But the film continually tested this patience, repeating the same style of scenes three or four times with only minor changes, turning the intrigue and mystery into tedium and boredom. This is eventually replaced with Scarlett doing her best deer-in-the-headlights impression as she eats cake, tries to have conversations and watch television, all while the pace somehow goes from glacial to absolute zero. I swear that the last third of the movie is just Scarlett looking like she’s watching a better movie going on behind the camera.

I get what Johnathan Glazer was going for, an unsettling, unpredictable life form going through baby steps of an entirely different civilization and their customs of eating, conversation and pleasure. It is not just foreign to this woman, it is other worldly. It’s an alien attempting to be like us and an alien’s interpretation of what humans must be like without ever directly giving her thoughts.

The problem is that this drags on and continually repeats itself far more times than it needed to. It gets to the point where it stops saying something and says nothing, especially when you just have your alien standing around doing literally nothing more than anything else.

While “Under the Skin” is certainly unsettling and even heart wrenching at a few points, I wanted to pull my hair out by the end of this movie. Nothing aggravates me more in movies than a film that feels it is so self important that it can just show people standing around for most of the runtime and call that “art.” Even if the film wanted to say something profound, that means nothing if you can’t keep my interest.