If you knew that your grandmother was dying and she didn’t, what would you do? Would you be honest with her and let her know that her time was short? Would you keep it secret and let it come to her peacefully?

What makes this question even more fascinating is that the answer varies wildly depending on your country. In America, death isn’t something that you hide from and must confront or accept – to not be truthful about it would be a disservice to that person’s decision on how to handle death. But in China, such a decision might cause their last precious days to be filled with misery, wondering when death will come. As such, most families hide this from the elderly, not just for to keep them happy but for the sake of tradition and modesty – as if it is a last request for your ancestors.

This is the central conflict of Lulu Wang’s “The Farewell,” where Billi (Awkwafina) has spent most of her life living in America, but returns to her Chinese family when they all learn that her grandmother Nai Nai (Tzi Ma) has lung cancer and will be dead within a few months. Billi’s extended family promises to not tell Nai Nai about her diagnosis and pretends that everything’s fine, creating a fake wedding for her cousin so that Nai Nai has one last opportunity to see all of her friends and family. While Billi isn’t initially invited, due to her wearing her emotions on her sleeves, she flies to China and promises not to tell Nai Nai the truth, despite how badly she thinks her grandmother deserves to know and how much she wants to say goodbye.

This is a conflict in many different ways, the most prominent being East versus West. Billi fights everything she’s been taught about honesty and being true to herself, and it constantly shows in Awkwafina’s restrained performance, communicating so much though emotion while being tight-lipped.

Yet, strangely enough, another conflict that shines is the older generation versus the new generation. Billi’s pleas to be honest with Nai Nai feel less like an American stance and more like a young woman who hasn’t experienced death or loss. She doesn’t know what do say or do because she is lost. While her parents and uncle aren’t stone-faced about losing Nai Nai either. Despite their resilience and refusal to tell their mother the truth, simply because of Chinese traditions they say, there are moments where they can’t always contain their emotions, as if their own children have proven that it’s alright to show weakness in the face of death. I found myself relating to Billi, not because of her American upbringing, but because she challenged what traditions have always said to face the reality of the situation, no matter how difficult that reality might be. 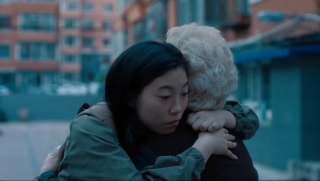 “The Farewell” certainly gives the audience a lot to consider and challenges many conflicts between different cultures in a time when those lines are becoming more blurry. It is a somber celebration of life when it is not examining the subtle differences between China and America. I can’t think of many movies that can bounce between Chinese and English so easily, but “The Farewell” uses both languages to their fullest. Whereas “Crazy Rich Asians” as a look at the extravagant life of China, “The Farewell” is a modest and humbling portrayal of China, showing how strong the family bond overpowers everything else.