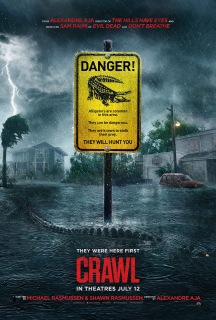 For a short thriller about a family trapped in a flooding house surrounded by alligators in the middle of a hurricane, you really can’t get much better than “Crawl.” It does everything it can with its simple yet effective premise, delivering some well-shot scenes that are perfectly paced while consistently racking up the tension. It doesn’t try to be any more than this, while nevertheless succeeding at being an effective, gripping story of a father and daughter overcoming several ferocious predators without coming across as invincible. As far as I’m concerned, that makes “Crawl” a near perfect thriller.

Another impressive feat are the effects used on the gators. While it was all done with CGI, it always felt like they were really there. The weight, size and power of the gators is always on full display, and you never see anything out of place or strange about their movements. This only makes these beasts even more terrifying, since gators have never been more intimdating and murderous than in “Crawl.” Who knew that gators could be the best cinematic killing machine since the Xenomorph?

While the performances aren’t noteworthy and pretty stiff, they do enough to convey emotion and make us care about the safety of the father and daugther. Plus their performances convey to us that this movie only has one goal of making alligators as cinematic as possible and it excels at creating a tense and effective experience. “Crawl” may not reinvent the thriller genre or tell a Hithcock-level story, but it hits all the right notes and is a great example of fitting right in with its genre.