It’s a little unfortunate that we’ve now reached a point in the Marvel Cinematic Universe that it is nearly impossible to talk about how spectacular one of the entries is without going into massive spoilers. I do my absolute best to keep my reviews spoiler-free, but even I had a difficult time keeping that up with “Avengers: Endgame,” especially since that film did not follow a logical path that “Infinity War” had set by going with a five-year time skip just twenty minutes into the movie.

Much like “Endgame,” “Spider-Man: Far From Home” is quite unexpected and has many twists and turns that the audience will not see coming, while also drastically changing how the story plays out from that point on. But while I won’t mention what those twists are, I can say that they are so expertly handled and built up that it makes “Far From Home” even more satisfying than “Endgame.” Combine this with stellar performances, especially from Tom Holland and Jake Gyllenhaal, and the same wonderfully awkward and down-to-earth sense of humor from “Spider-Man: Homecoming,” and you get the best Spider-Man movie to date.

Set a few months after the events of “Endgame,” the world is still grieving over the death of Tony Stark (Robert Downey Jr.), especially Peter Parker (Tom Holland) who is also being bombarded with questions about Spider-Man replacing Iron Man. Feeling suffocated by these unbelievably heavy responsibilities, Peter gets away from it for a while by going on his class trip through Europe, where he intends to tell his crush, Mary Jane (Zendaya), how he really feels about her. But his plans become increasingly more complicated when Nick Fury (Samuel L. Jackson) snatches Peter away to deal with a new threat from an alternate Earth, with the help of that Earth’s only surviving hero, Mysterio (Jack Gyllenhaal). 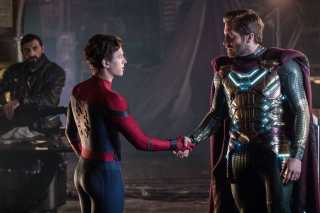 Part of the reason “Far From Home” works so well is due to how it builds off of “Endgame.” Little things like 3.5 billion people suddenly popping back up on Earth are addressed, especially since a large portion of those people are now homeless, while others have to deal with friends or family being five-years older than they remember. Nick Fury, for example, is a lot tougher and more agitated than usual, since he’s missing five years of information and progress, almost like he’s an alien on Earth now.

But the biggest development following “Endgame” comes in the form of an Iron Man-shaped void in the world. We see monuments and tributes to Tony Stark in many shapes and forms throughout the movie, while others constantly question what will happen to Earth now that their greatest hero is gone. All of this is given even more gravity with Peter coming to terms with losing his mentor, while questioning his own mortality. He begins to think that being “the next Iron Man” must mean that he has to lay down his life if necessary, which is something he can’t even begin to consider if he hasn’t even told his crush that he likes her.

This is probably the first time the Marvel Cinematic Universe has asked if it is right to be a hero if it means sacrificing an ordinary life, and this is all done masterfully through Holland’s subtle performance, while Jackson and Gyllenhaal continually pull him in opposite directions.

All of the strengths of “Homecoming” are also on display in “Far from Home,” especially the comedy. The colorful cast of high schoolers feel just as genuine and honestly awkward as ever, while characters like Ned (Jacob Batalan) and Mary Jane get more time to develop and grow into their own brand of comedy.

If I could describe “Far From Home” in one word it would be maturing. As Holland’s portrayal of Spider-Man goes from wide-eyed joy to confused and misplaced, we watch him and the world evolve and come to terms with the fact that these superheroes are just as mortal and flawed as everyone else. The growth of Peter Parker throughout this movie is both entertaining and well-earned, especially as those twists and turns are introduced. Even characters like Ned and Mary Jane show plenty of maturity, learning to overcome their own awkwardness as they grow on this Europe trip as well. All of this adds to one of the most rewarding and satisfying superhero movies in a while and the most well-put together Spider-Man movie to date.