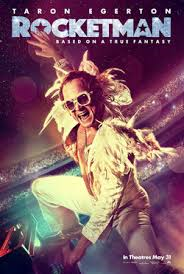 Going into “Rocketman,” I expected something along the lines of “Bohemian Rhapsody,” detailing the life and music of one man and how that impacted the lives of so many people. But instead, “Rocketman” dives into how the art impacted just one man, in this case the artist. Instead of a realistic approach the music like in “Rhapsody,” this is more of a traditional Hollywood musical, where the songs are used to show a character’s emotional state of mind in ways that can’t be described without using fantasy and imagination, much like Elton John himself. Moments of overpowering joy are highlighted by “Crocodile Rock,” while “Tiny Dancer” makes another scene far more melancholy and tragic.

Rather than doing a documentary style retelling of a musicians’ life, “Rocketman” puts us in the mind of the musician, as if the whole movie feels like we’re experiencing life from Elton John’s eccentric perspective. Instead of the music coming from his soul, his music is used to describe moments in his life, defining who he is as an artist, friend, lover, son, and icon. For once, it feels like we see the full picture of a rock star’s life, without ever cutting corners just to play to the audience. Both the good and bad of Elton are shown to the audience, while always celebrating his life and what he created, always brutally honest.

It certainly helps that Taron Edgerton plays the role with sincerity and passion. He practically disappears in the role, only sometimes reminding us that he’s there when he doesn’t quite sing the line exactly like Elton did. Then again, that only makes me appreciate his performance even more, since you know he’s singing with much of the same emotion as Elton John. Edgerton’s chameleon-like performance makes “Rocketman” one of the best rock star biopics and one of the best musical fantasies in decades.