What should a great monster movie be like? What elevates a film about abominations of life above your standard eye candy into something worthwhile and meaningful? Can a monster movie be more than just eye candy?

I ask this because of my own mixed feelings about the newest entry in the Godzilla series, “Godzilla: King of the Monsters,” and how it excels at what the general audience goes for, namely intense monster action with a massive size and scope while the monsters exude power and might, while seemingly fails at nearly everything else, especially with the narrative and characters. The film was often exciting and satisfied that burning urge for monster destruction, something that hasn’t been done this well since “Pacific Rim,” so does that make “King of the Monsters” a worthwhile experience? And if it doesn’t, what would it really take for a monster movie to be better than this?

When I think of great monster movies, the first ones that come to mind are “Frankenstein,” “Jaws” and “The Shape of Water.” While all play with the monsters in different ways, some showing that man is the true monster, while others show that monsters are simply misunderstood, these films never lose sight of their humanity, the soul of any monster movie. No matter how much death and destruction these monsters bring, they have no lasting effect if they don’t challenge us and our ideals. This isn’t to say that using monsters as action sequences is bad, but that unless the whole movie is nothing but monsters fighting one another there needs to be something that touches the mind as much as the heart.

The Godzilla movies are no exception to this. Despite every movie indulging in city-wide destruction and monster battle royales, there are some that are much better than others, like “Mothra vs. Godzilla” or “The Return of Godzilla.” These outstanding movies, like “Frankenstein” and “Jaws” value a compelling story, often about how the world would react to such giant indestructible monsters, with characters that are tested by a storm no one could ever comprehend. There are of course Godzilla films that serve merely as eye candy and do it well, and I think that’s what most people see Godzilla as, even though he can be so much more. 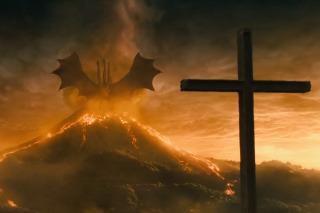 “Godzilla: King of the Monsters” is one of those monster movies that knows the audience wants monster destruction and couldn’t care less about the story. When the movie focuses on the scenes of Godzilla, Mothra, Rodan and King Ghidorah tearing the world apart and making humanity feel small and insignificant, it is heart-pounding and mesmerizing, keeping the same sense of scale and scope from the 2014 “Godzilla” while amping it up with fantastic powers and abilities for King Ghidorah and Rodan. When the film isn’t showing the monsters though, it is a confusing mess of poorly explained science fiction and inept characters that can’t decide what they want.

But while I firmly believe that a film titled “Godzilla: King of the Monsters” should be about Godzilla and shouldn’t have any human characters outshine him, there is no attempt at bringing humanity and challenge here either. Any message or themes are muddled by the many scenes of destruction, brought on by a group of humans unleashing monsters upon on the world to “save humanity.” Without that challenge to our ideals and our struggle to remain strong in the face of something stronger, it’s just a dumb, mindless action movie.

And that’s exactly what “Godzilla: King of the Monsters” is – a mindless action movie with some visually-stunning sequences that rival any of the Marvel movies in terms of gripping action, but has nothing else going for it. I can see myself skipping over every scene with these bland, unlikable or poorly performed characters and going straight to the monster scenes when this comes out on DVD, but I don’t think that’s how Godzilla movies should be watched. That’s just a clip show or a YouTube video, not a film.

While I am happy to see Hollywood bring King Ghidorah and Mothra to the big screen and make them as intimidating and majestic as they deserve to be, I can’t help but feel disappointed in “King of the Monsters.” The movie screams of Hollywood clichés, including corny one-liners, and predictable moments that we’ve seen in dozens of action movies. It might not be as cliché as the 1998 “Godzilla” but it does reek of studio interference, which might be the biggest disappointment of all.

Overall, there’s just as much to love about “Godzilla: King of the Monsters” as there is to hate about it. It bounces between being some of the best monster eye candy in recent memory and a bloated mess of a story. While it will please many Godzilla fans with the return of classic monsters, nods and references to films from the Showa and Heisei series and a rather heart-pounding score by Bear McCreary, it all feels a bit superficial. The love for Godzilla’s past only goes so deep, especially with all the typical Hollywood clichés getting in the way. It is a serviceable action movie, which makes it an okay Godzilla movie, if a bit worse than the 2014 film.