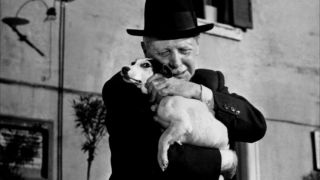 It has been close to six or seven years since I’ve seen an Italian neo realist film, and while watching “Umberto D.” I suddenly remembered why I’m not a fan of the film movement and why I haven’t watched one in years. There is a certain appeal to the genre – no actors, no big Hollywood stories that try to play up reality for dramatic reasons, just real people living their lives in a harsh post-WWII world. “Umberto D.” certainly has this in spades, as a retired government worker (Carlo Battisti) does everything he can to not get evicted from his home without anyone to help besides his pregnant neighbor and his dog.

But, like so many other neo realist films, it never succeeds in pulling me in. Despite the vivid unforgiving world it paints, and the struggle it creates for its lead character, Umberto seems like such a lifeless character as he waddles from scene to scene aimlessly. Part of the problem could be the whole “casting actors with no acting experience” experience of neo realism, they just can’t convey the passion and emotions as well as expressive actors.