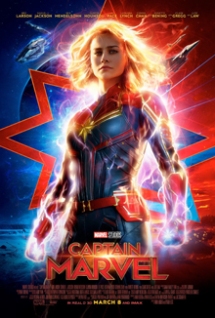 After so many amazing super hero movies, ones that always find a way to reinvent the genre and tell stories that appeal to all ages, I’ve begun to think if it is actually possible for Marvel to make a dud. Not financially certainly, every one of their movies will always make at least three times its budget back even if the movie is trash (I’m looking at you “Thor: The Dark World”), but an emotional dud, one that just didn’t live up to the expectations the other Marvel movies have set. Marvel has been on a hot streak for several years now, every film since probably “Captain America: The Winter Solider” being a worthwhile movie – not just great superhero movies, but good films and experiences in general.

While “Captain Marvel” is receiving the usual critical praise these movies get every time a Marvel film is released, this time around I find myself disagreeing with it. The film is certainly colorful, has the usual Marvel world building and has a few high points, there are so many distracting elements that ruin many crucial scenes and drag the movie down. The film is certainly empowering, maybe overly so since it often shoves the fact that Captain Marvel is a woman down our throats, but it fails to make the character or her actions endearing.

Set in the 1990s, the film follows Vers (Brie Larson), an alien warrior of the Kree Empire, who has no memory of her life before becoming the apprentice of Yon-Rogg (Jude Law) six years ago and keeps having these strange flashes and dreams of a life she doesn’t remember. Vers and Yon-Rogg are fighting a never ending battle against the Kree’s worst enemy, the shape-shifting Skrulls. After the Skrulls ambush and capture Vers, they’re able to learn through her memories of a device that could finish the Kree/Skrull war and head to find it on Earth, all while Vers learns about a woman named Carol Danvers.

The first noticeable disappointment in “Captain Marvel” is one I think everyone has a problem with – lots of shaky cam. The Marvel films have always had very easy to follow fight sequences, with characters in brightly colored outfits and very steady and smooth camera movement, even in many of the bigger more sprawling fight sequences like in “Infinity War.” “Captain Marvel” decides to throw all of that out the window and use a lot of close-up shots during its fights, all while the camera moves around like a five year old is holding the camera. Most of the time, I had no idea what was going on in these fight scenes, just a lot of blurry colors, and since everyone is wearing bright colors I couldn’t tell who is who. I honestly thought we were passed the point of shaky cam, where every filmmaker had realized it is the worst filming technique and we’d never see it again, but I guess I was wrong.

Another problem is how predictable and cliché the story is. It’s funny that this is set in the 1990s, because at times it feels like a super hero film made during that era, often feeling as smart as films like “Steel” starring Shaquille O’Neal, “Barb Wire” starring Pamela Anderson and “Batman and Robin,” in other words the “dark age” of superhero films. Everything from the character actions, the terrible 90s jokes about dial-up internet and Blockbuster Videos, to even lines of dialogue are extremely predictable. The film offers nothing new to the Marvel formula, even dumbing it down at many parts, so after twenty movies of this formula, the audience is always five steps ahead of this movie. This means that the jokes don’t work, and the story feels like something we’ve heard a hundred times by now. “Captain Marvel” never feels new or innovative, because this story is so formulaic, almost like a robot wrote the screenplay.

But quite possibly the biggest problem with “Captain Marvel” is very simple – Brie Larson’s performance is uninspiring. Larson often looks lost in this role, stone-faced and emotion-less throughout most of the movie. While her character is supposed to be repressing her emotions, that doesn’t stop Jude Law from turning in a captivating and mysterious performance. In fact, other actors like Samuel L. Jackson and Lashana Lynch act circles around Larson, making me care way more about these supporting characters than I care about the lead hero. Larson shows no enthusiasm, delivers her lines with such a cold, uncaring demeanor that it makes her a dull, boring protagonist. Combine this with the predictable story, and it gives you a dull, boring movie. 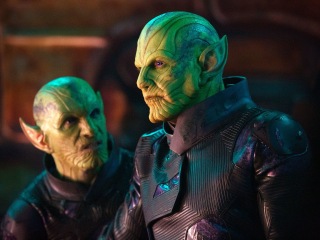 And since Brie Larson has often turned in very emotional, heartfelt performances, including one that got her Best Actress in “Room,” I’m inclined to believe the blame for this can be put on the directors, Anna Boden and Ryan Fleck. What should have been an inspiring, fun and uplifting film about the first lead female superhero in the MCU turns into one of the most predictable, hard-to-watch superhero movies in years. Because Boden and Fleck made Captain Marvel into a robot-like character, I see no reason to care for this character.

Maybe its the Marvel curse for their origin stories – pretty much all of the MCU origin films are fairly predictable and the lead hero is often the least interesting part. That would certainly be the case here, since I found the Skrulls to be the best part of “Captain Marvel,” with their shape-shifting powers and underhanded-tone of voice, they turn a crowded train into a very suspenseful scene. It’s like if there were a whole race of the alien from John Carpenter’s “The Thing” and they invaded Earth. If there were more scenes like that, this would have been a much better movie.

But as it stands, “Captain Marvel” does not live up to the standards the Marvel movies have set over the last decade. There are some standout moments, especially when they involve the support cast such as Nick Fury or Annette Bening as the leader of the Kree Empire, and it does elevate the film to make it at least tolerable. It’s certainly not the worst Marvel film, since it does have redeeming factors that make it worth seeing, but the reliance on shaky cam, the predictable story and Brie Larson’s unenthusiastic performance certainly don’t make me want to watch it again.