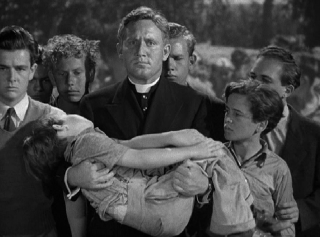 Compared to the hardened, thought-provoking films of today, “Boys Town” feels like a trip to get ice cream after a very big meal – sweet, comforting and pleasant, but you’re already so full that you don’t really want anything but you won’t turn down ice cream. “Boys Town” is schmolstzy and cliche in all the best ways, filled with the same ideals and philosophies as its main character, Father Flanagan, who always believed that there’s “no such thing as a bad boy.” Everything about this movie plays to that idea, where this idealic town is practically paradise to hundreds of young boys, where they’re always smiling and cheerful and nothing bad ever happens. And while the filmmakers don’t skimp on the hardships Flanagan (Spencer Tracy) faced making Boys Town and the one troublemaker (Mickey Rooney) giving him a hard time, there’s always an atmosphere that this is heaven for all boys, which plays better than expected thanks to Tracy’s performance and the schmolstzy 1930s film style. It is a very pleasant and harmless movie about a kindhearted soul that wanted to make the world a better place.