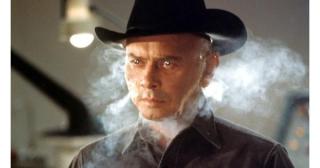 Most people probably aren’t aware that there was a “Westworld” movie directed by Michael Crichton, long before the recent HBO series. The movie has the same concepts as the show, an amusement park that simulates the old west and is filled with androids that are simply there for the guests amusement and something goes horribly wrong in the park. And while the show went into more detail about the park’s creation and the psychology of the androids, as well as whether or not they’re alive, the movie goes for a simple, bare-bones approach, told mostly through a visitor’s perspective (Richard Benjamin) as things start to get worse. Why the androids break down is barely touched on, how the park was created is never mentioned, and the idea that the visitors might be harming sentient creatures is ignored. And while there is so much more that the movie doesn’t touch on, for a tale about a vacation to the old west gone horribly wrong, the acting and atmosphere really sell the whole experience. I’d certainly recommend the show over the movie, but this is still servicable.