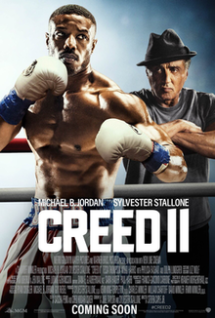 “Creed” was quite possibly the biggest surprise of 2015. I had no idea going in that a story about the long-lost son of Apollo Creed being trained by an aging Rocky Balboa would be any good, but then the film blew me away with stunning performances from Michael B. Jordan, Sylvester Stallone and a gripping, emotional tale about legacy and second chances while honoring the past and looking ahead to the future. I loved every second of “Creed,” and still feel that it is the greatest sports movie of the last two decades.

So naturally, “Creed II” was green-lite almost immediately, and like most sports movies, the sequel had to up the ante. But the progression here feels natural – now that Adonis Creed (Jordan) has made a name for himself in the boxing world, he has to face the son of the man that killed his father in the ring, Ivan Drago (Dolph Lundgren). It’s a rather predictable storyline, but like the rest of the movie, it is played masterfully, certainly helped by Stallone returning to write the screenplay.

I felt that the best part of “Creed” was Stallone taking on the role of mentor, his character coming full circle and finding his purpose again long after he thought his life was over. And while Stallone gets some good scenes throughout “Creed II” especially when he tries to be in Adonis’ life outside of the ring to make up for how bad of a father he was to his own son, the main focus is rightfully on Adonis and his drive to fight Drago’s son, as well as facing the ugly side of the boxing world. 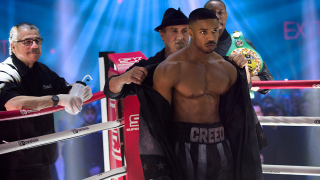 Michael B. Jordan goes through hell in this movie, and it feels like we go through every painful step with him, as he faces both physical and psychological torment he must endure alone. Even if his journey is formulaic and predictable, Jordan’s performance is so captivating that it’s hard not to be invested in his struggles.

Another great part of “Creed II” is the story of Ivan Drago and his son following the events of “Rocky IV.” Like a dark reflection of Adonis’ story, theirs is one of redemption and dismantling the shame of their family name the only way they know how, by fighting. A lot of this is said without many words, just Lundgren and Florian Munteanu’s stoic performances. While not a big part of the movie, it does serve to make the Dragos into much more sympathetic characters after how basic and underdeveloped Drago was in the past. 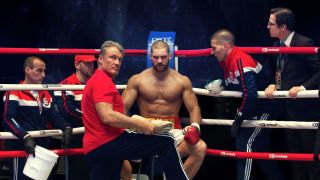 Still, “Creed II” follows many of the same sports clichés we’ve come to expect – pride getting in the way of everything else, the mentor that doesn’t approve, the training montages, the mentor and fighter disagreeing so much that they don’t want to see each other again, and so many more. But the best part of this movie is that these clichés never grow tiresome. We recognize these moments, but they’re handled so well and acted so brilliantly that we don’t mind them. Even if we can see them coming from a mile away, Adonis and Rocky are just so likable that it’s hardly a problem.

Overall, “Creed II” is not quite to the same level as the first film, but it is still a worthy sequel, building off the themes and plotlines of “Creed” and the previous Rocky movies. It is predictable, but enjoyable nonetheless. If you enjoyed “Creed” then you’ll have fun with this one too. Even though I’m not a fan of predictable sports movies, this one always had my attention.