The greatest strength of “Bad Times at the El Royale” is its unpredictability. The market campaign and trailers brilliantly set this scene by only giving the audience a taste of what the film is about, without ever shading light on what happens. This is something Alfred Hitchcock perfected – no giving away any of the surprises or twists until we’re already caught in the moment, so that they hit the audience even harder.

I had no idea where the story of “Bad Times at the El Royale” was heading because I was so caught up in the foreboding and haunting atmosphere of this hotel that sits halfway between sunny California and sinful Nevada. The film plays this as a strength, giving the audience a truly unique and unforgiving thriller where every character is suspicious and untrustworthy, leading to some powerhouse performances from Jeff Bridges, Jon Hamm, Cynthia Erivo and Lewis Pullman. This makes “Bad Times at the El Royale” the most unique and inspiring thriller in years.

In this story of seven strangers spending the night at a hotel off the beaten path and only one employee (Pullman), we learn that each of them is hiding something sinister that plays a much bigger part than they’re letting on, while even the hotel hides secrets from our cast of colorful characters.

I’ve never seen a thriller quite like “Bad Times at the El Royale,” effectively a network-narrative that doesn’t play favorites. This film is equally suspicious of each character, questioning their morals and even their faith. Religion and how each character reacts to God becomes a much bigger part of this movie than one would expect and leads to some of the better acting moments from Bridges and Pullman. 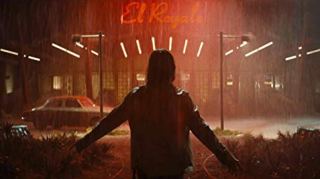 What brings this move down though is its runtime and pacing. The film is nearly two and a half hours when it easily could have been told in two hours and spends a bit too much time on flashbacks, especially near the end of the movie. While the first hour is tense and atmospheric, the last 45 minutes tend to drag and breaks up the suspense with out-of-place scenes. It is unfortunate that such a great and original thriller would be dragged down by its own originality.

Overall though, “Bad Times at the El Royale” is still a worthwhile thriller, bolstered by a unique screenplay and some captivating performances. I never knew exactly where the film was going to go next, and that is surprising to see nowadays. While the pacing and unnecessary editing gets in the way near the end, the rest of the film is strong enough to make for a standout film that I won’t be forgetting any time soon.