The 1970s was the renaissance in filmmaking. It was the first time in over 40 years that Hollywood’s many limitations were lifted and filmmakers could tell more brutally honest stories that they never could have before. Instead of campy and overly cliché films like “Hello, Dolly!” and “It Happened At the World’s Fair,” filmmakers like Stanley Kubrick and Martin Scorsese were pushing the envelope of what cinema could show with movies like “A Clockwork Orange” and “Taxi Driver.” Yet, at the same time, filmmakers like Francis Ford Coppola and Steven Spielberg found new ways to take capitalize on this graphic nature without sacrificing visual storytelling with “The Godfather,” “Apocalypse Now” and “Jaws.” This isn’t even limited to the most well-known filmmakers, with classic like “The Exorcist,” “The Sting,” “Chinatown” and “One Flew Over the Cuckoo’s Nest.” And of course there was a little known film called “Star Wars.”

It’s safe to assume that we’ll never have another period in filmmaking as experimentally rewarding, freeing or fascinating as the 1970s. An embodiment of this ideal is 1974’s “The Taking of Pelham One Two Three” and how it updates the tired crime thriller with brutal realism without ever losing focus on the strength of its characters.

In this gritty thriller, a group of four men armed with submachine guns hijack a New York subway train. As the transit authorities and the police slowly find out about the hijacking and the 17 passengers turned hostages, the leader of the hijackers (Robert Shaw) makes his demands – one million dollars in one hour, and for every minute the delivery is late they will kill a hostage. Now it’s up to the joint force between subway and police, led by Lieutenant Zachary Garber (Walter Matthau) to negotiate with the uncooperative hijackers and save all of the hostages before it’s too late. 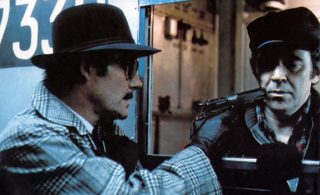 “The Taking of Pelham One Two Three” works because of how innocent yet terrifying its concept of an unsuspecting subway car being hijacked plays out as a tense thriller. Anyone of us could be one of those hostages. Yet the hijackers are unflinching and ruthless, dedicated only to their tasks without concern for anyone besides themselves. Each of them is prepared to take another life if it means it’ll bring them closer to that million dollars. The slower, methodical pace works to the films’ advantage, focusing more on the unforced realism that elevates this above so many other thrillers of its kind.

While the plot is rather predictable due to the formula of this type of thriller, it’s the vast range of characters that we end up caring about. From the hostages making an effort to level with their captors and fearing just what they’re planning to do even if they get their way, to the police putting everything on the line just to save 17 people, there is no shortage of worthwhile characters doing their best to handle a crisis. But the real standout characters are the classy, methodical hijackers, who have every detail of this convoluted idea planned out and act like this is all a sure-fire deal. They’re convinced that they have this million dollars in the bag and wait for everyone else to catch up as their plan unfolds. This level of class and pride in their work makes their realistic nightmare hijacking far more enjoyable than I expected.

Overall, “The Taking of Pelham One Two Three” is a different sort of crime thriller worth checking out. Rather than relying on the expected plot mechanics of the genre, it plays with the realistic fears and emotions of this situation while giving us a wide range of characters and superb performances, especially from Walter Matthau and Robert Shaw. It is experimental and brutally honest without ever sacrificing realism, just like many other films from the 1970s.