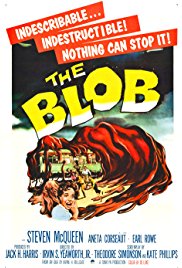 Meet the definition of cheese and camp for science fiction in the 1950s – “The Blob.”

Looking beyond the laughable yet effective special effects, mostly consisting of running slime down a slope, and the story being made up of adults playing rebellious teenagers while trying to stop an alien amoeba creature, I feel the main reason people still talk about “The Blob” is because of the lead actor – Steve McQueen in his film debut.

Despite the fact that he does not look like a teenager in his Mister Rogers sweater, all the elements of what made McQueen so likable are here – cool, suave, rebellious, but with a heart of gold. Even if this is just a B-movie with a cult following, McQueen gives an A-list performance and sells that this is a teen that feels like he has the world against him. Effectively, he’s playing the boy who cried wolf, as the whole town doesn’t believe there is a gelatinous monster and every time he spots the jelly, it vanishes. He spends the rest of the movie proving that he’s not insane and trying to save the town from being consumed by the blob, and McQueen lives in the agony and pain of his character. 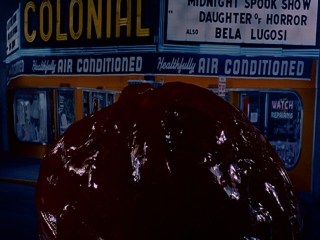 Beyond this, “The Blob” feels like a beach party movie that turned into a low-budget monster film, with it’s overplayed rebel teens versus the police plot and how the adults just don’t understand the kids these days. This plot takes up far more of the film than the story about the monster terrorizing the whole town. Then there’s the 1950s groovy theme for the Blob that feels like something out of “Scooby-Doo.” The whole film is campy fun like this, but it never takes itself too seriously so that the mood becomes disturbing, despite the fact that citizens are being dissolved by an alien jam.

Overall, “The Blob” has certainly earned its cult status, even if it belongs on “Mystery Science Theater 3000.” It’s a strange mix of a rebel teen tale and a B-horror movie and works as both for the most part. The effects are minimal and dated, but still get the job done, especially during the climax. And of course, Steve McQueen turns in a captivating and heartfelt performance that he would become known for long after this film. Watch this one with some friends and some alcohol, and you’ll have a blast.