2018 for Marvel will certainly be remembered for the release of “Black Panther” and “Avengers: Infinity War,” which have quickly become the two highest grossing superhero films of all time, while “Black Panther” gave us a stylized look at a diverse culture and “Infinity War” showed the epic potential of the superhero genre at its most extreme. In the scheme of things, “Ant-Man and the Wasp” feels small and rather unnoticeable compared to everything else Marvel has done this year, much like its heroes powers. Though honestly, I believe that was the intention of “Ant-Man and the Wasp.”

This is a palette cleanser after the intense and convoluted “Infinity War” blew everyone away. It doesn’t try to match that ambitious style and instead goes for a low-stakes yet funny and character-driven action piece. It matches the style and tone of the previous “Ant-Man” while upping the charm of its cast and their relationships. While “Ant-Man” was strictly a heist film, “Ant-Man and the Wasp” plays out unlike any other film Marvel has produced, due to the love-hate relationship of its two leads, and it is a welcomed addition. 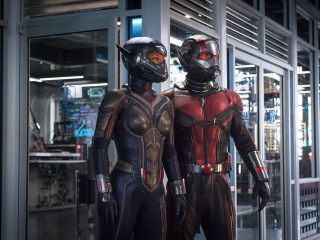 This makes “Ant-Man and the Wasp” an improvement over “Ant-Man,” while never trying to be anything more than fun summer blockbuster that often feels like a buddy cop film.

Set two years after the events of “Civil War,” Scott Lang (Paul Rudd) has been under house arrest for fighting the Avengers and is nearing the end of his imprisonment. But after he has a strange dream about going back to the Quantum Realm, he tells Hank Pym (Michael Douglas) about it, and is subsequently kidnapped. Pym believes that Lang is the key to finding his long lost wife, Janet, who has been trapped in the Quantum Realm for 30 years and set out on a mission to rescue her, along with Pym’s daughter Hope Van Dyne (Evangeline Lilly). But when a new villain that can phase through solid matter surfaces, Lang is forced to become Ant-Man again and finds that Hope has her own suit with shrinking abilities. 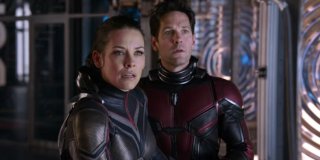 The main thing I took away from “Ant-Man and the Wasp” was how charming and likable the entire cast is while remaining flawed and broken characters. The lengths Scott and Hope go to for other people had me smiling all throughout the film, especially in the early scenes. The way Scott is reintroduced to us as a passionate, loving father with a lot of free time on his hands, thanks to his house arrest, is one of the most touching and heartfelt scenes in any Marvel film. While Hope is determined and focused, yet seems to really love being a super heroine, taking every opportunity she can to show off her skills. I fell in love with these characters again from their first scenes, while appreciating the filmmakers downplay the romantic interest to focus on character development.

In fact, many elements from the first film are downplayed. Luis (Michael Pena) and Scott’s group of ex-cons have only a handful of scenes and one really great scene involving a group of black market dealers. Instead, the film uses this time to show the conflict between its leads, namely Scott’s lack of commitment to the mission and Hope’s inability to care for anything besides the mission. This creates tension that feels honest without saying too much about it, lending well to Rudd and Lilly’s acting abilities and their on-screen chemistry. 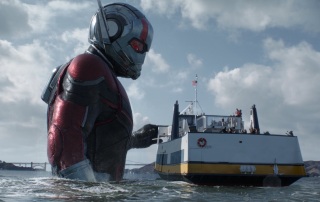 The comedy in “Ant-Man and the Wasp” is effective, but more so in the cute way it plays with the characters powers. Some of the funniest scenes involve objects or people growing or shrinking, especially Luis during the climax or Scott getting shrunk to the size of a kid while in an elementary school. The dialogue is sharp and witty without coming off as over the top or begging for jokes, letting most conversations play out as naturally as you’d expect for heroes who can control ants. It’s not the funniest Marvel film, and some jokes aren’t as effective as others, but it has several hilarious scenes that add to the cute charm of this film.

Overall, “Ant-Man and the Wasp” is the exact opposite of “Infinity War” – small, low-stacks, while focusing on just a handful of characters that go on a journey that should be simple and gets more complicated over time. And that’s exactly what Marvel needed right now. After such a big epic that felt like a bit too much at times, it’s pleasant to watch a superhero film that focuses so much on family relationships. Rather than winning the audience over with effects, action sequences or even comedy, this one does it with little moments of heroes becoming human, highlighted by superb acting all around. This is one of the more fun, laid-back Marvel films, and it certainly one worth seeing.