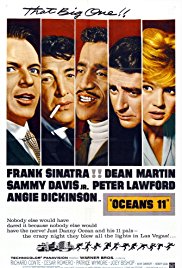 I don’t say this too often, but there are remakes out there that are better than the originals, even if they are few and far between. Most of the best remakes are the ones that you probably didn’t even know were remakes, like Brian De Palma’s “Scarface” or Martin Scorsese’s “The Departed” and even “The Maltese Falcon,” the film that started the film noir genre, is a remake. These retellings often take these old fashion stories further than the originals ever could or tell them in a far more captivating way. In this case, the original Rat Pack’s “Ocean’s 11” pales in comparison to Steven Soderbergh’s “Ocean’s Eleven,” mostly due to pacing and a lack of tension from the original.

These films do have nearly identical plots – A group of eleven highly trained professionals decide to pool their talents and cunning to simultaneously rob the biggest casinos in Las Vegas. In the original 1960 version, these men were part of the 82nd Airborne in World War II and are led by Frank Sinatra, while in the remake these men come from around the world and barely know each other while being led by George Clooney, both playing the titular Danny Ocean.

Both films boast an all-star cast for their times, with the 1960’s version going all-in on singers-turned-actors like Frank Sinatra, Dean Martin, Sammy Davis Jr., and big name actors like Peter Lawford and Joey Bishop, while the remake of course had actors like George Clooney, Brad Pitt, and Matt Damon. Where they differ is how these characters interact, with the original going for a more natural and authentic feel. Their conversations are straight to the point and bare-bones, while the remake is full of wit and snappy-dialogue. Neither is inherently worse than the other, since their interactions set the tone for the rest of the film, but in a film that has to quickly set up eleven different personalities, it is nice to see some charisma.

But the biggest difference between these two films is the tension during their heists and how it is practically night-and-day. In the original film, these guys are nonchalant about everything, trying to look as cool as possible while robbing casinos. As a result, they make it look mundane and easy to rob the place that by the time the heist starts, the tension of their plan succeeding has all but faded. In the remake, they stress how impossible this task is and how they’ll fail if they make one wrong move, with each scene racking up the suspense higher and higher. I don’t get that these guys will fail their mission if they make one wrong move in the original, because they make it look so effortless.

Watching these two is like seeing some guy in a suit steal candy from a baby carriage like it was nothing, and then watching another guy being chased by the cops with a huge bag of money in hand, and see him steal the candy along the way.

Overall, “Ocean’s 11” felt like a bore, especially compared to the Rat Pack’s other big hit, “Robin and the Seven Hoods.” It is your typical heist film with a slight sense of humor, but never to the point that it overwhelms the dry tone. Outside of Sinatra, Martin and Davis Jr., you don’t get to know any of the other guys, to the point that side characters like the reformed mobster Duke Santos (Cesar Romero) and a drunk Shirley MacLaine have more character than half of these guys. There’s nothing too special here, and I would highly recommend checking out the remake over this film any day.