I’m not entirely sure if I should consider “Jumanji: Welcome to the Jungle” as being nostalgic or not. While it is a sequel to the 1995 film with Robin Williams, outside of a few minor references here and there, it doesn’t really feel like a sequel since it takes everything in a vastly different direction. The original film brought the game to the real world and treated its massive epic scale as if it had no consequences. The new film is less about the game and more about trying to turn make a video game story into a movie plot.

Strangely enough, I remember watching “Jumanji” plenty of times when I was a kid, but never really liking it. The film was just something that could be put on in the background and was sometimes enjoyable because of Robin Williams, but that was about it. So even if you could consider this movie nostalgic, it didn’t work on me at all. “Welcome to the Jungle” did not make me pin for the old movie, nor did it harken back to my childhood, because both films don’t feel connected at all.

“Welcome to the Jungle” picks up right where the first “Jumanji” left off, as someone discovers the haunted board game on the beach. The father gives the game to his son Alex, but is turned off by it being a board game and not a video game. But it turns out Jumanji is a vengeful and all-knowing piece of wood and magically turns itself into a video game cartridge that sucks Alex inside the game.

Cut to present day when four vastly different teenagers are sent to detention and find the Jumanji video game. Not knowing what awaits them, they all select their avatars and get sucked inside as well, turning into their selected characters, including the muscle-head Dr. Smolder Bravestone (Dwayne Johnson), the tiny yet intelligent Franklin “Mouse” Finbar (Kevin Hart), the cartographer Professor Shelly Oberon (Jack Black) and the commando dance fighter Ruby Roundhouse (Karen Gillan). Together, these four have to overcome their differences and personal problems to make it out of the video game before they lose their three lives and get a game over.

The best part of this movie is watching actors like Dwayne Johnson and Jack Black act like teenagers in their own bodies, always astounded at the things they can or cannot do. In the real world, Dwayne Johnson’s player is a guy afraid of everything, always letting that fear consume him. So it’s pretty good seeing someone the size of the Rock always acting like the tiniest animal is a tiger ready to pounce. But the best one of these is Jack Black, whose player is a self-centered teenage girl. Not only is it hilarious to see Jack Black acting like a girl who loves her body, but this leads to some of the best jokes when she has to learn to go to the bathroom as a man. She also goes through the most personal growth, learning that life shouldn’t just be about looking beautiful and her phone, so that’s a big plus as well.

Other than that, “Welcome to the Jungle” is all about mocking and adapting to the many tropes of video games. From in-game cut scenes, to extra lives, to character attributes and weaknesses, to everything being broken up into separate missions and the non-playable characters only having a few dialogue options, this movie goes all in on video games. Though I do find this odd, considering that the Jumanji cartridge was untouched since 1995 when the most complex games were “Super Mario 64” and “Street Fighter II,” yet this game has as many intricate parts and choices as games like “Skyrim” and “Grand Theft Auto V.” 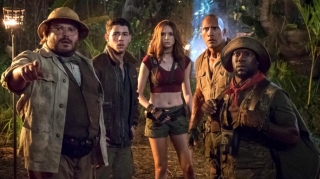 And if that last paragraph scared you off with all my video game lingo, then just know that “Jumanji: Welcome to the Jungle” certainly isn’t for you.

In any case, this film is a fine piece of dumb mindless action with some decent comedy mixed in. It really isn’t anything special, but I don’t regret seeing it. The film looks nice with its jungle backdrop and makes you feel like you’re going along on this video game adventure. The character development for these teens feels natural and the whole body swap angle is used well throughout the film, especially with the teenage girl being in the body of Jack Black. This was a fun ride, but probably not one I’ll be checking out again any time soon.