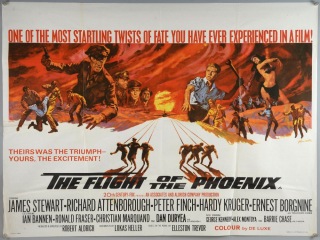 It is fascinating that I saw “The Flight of the Phoenix” shortly after watching “Lord of the Flies,” and seeing how both have very similar situations, but each takes a vastly different approach, with each leaving little to no moral gray area. Both films concern the survivors of a plane crash and the inhospitable environment they now find themselves in. While “Lord of the Flies” gave in hostility and a loss of ethics, “The Flight of the Phoenix” bravely asserts a strong sense of morality and the need to be civilized above all else. Even as these men slowly lose their minds from the exhaustion and lack of water, the refuse to give in to temptation and turn on their fellow men.

In “The Flight of the Phoenix”‘s case, our group of survivors find themselves trapped in the middle of the Sahara desert after their plane crashes, with no hope of anyone coming to rescue them. They come up with all sorts of plans to get out of this, with some saying they should just try to walk out of there, but the craziest yet sensible plan is devised by a German plane engineer – take the working parts of the crashed plane and construct a new plane to get them out of there. 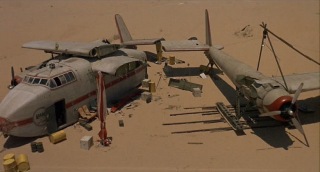 Part of the reason “The Flight of the Phoenix” works as well as it does is because of its small cast of proud yet strong characters. They all come from different background and cultures and, for the most part, none of them get along at all as they always butt heads and act like they’re the only ones doing all the work. James Stewart plays the pilot of the cargo plane, and he adds his always amazing style to this performance that adds some humanity to the role. Richard Attenborough plays his drunk co-pilot who learns a lot about himself and his quiet strength over the course of the film. Hardy Kruger plays the German engineer, who is a proud yet stubborn man who thinks of himself as being better and more deserving than anyone else there, which makes for a great foil to Jimmy Stewart. Even minor roles from Peter Finch and Ernest Borgnine leave memorable impressions in the same way all the minor roles in “The Dirty Dozen” did.

I would describe “The Flight of the Phoenix” as “Lord of the Flies” but with the ethical and moral sense of “The Poseidon Adventure” while also having the same style of sense of humor and danger as “The Dirty Dozen.” Survival is the focus, but done so without removing the human desire for power and control over any given situation, even if life and death is on the line. I had a lot of fun with “The Flight of the Phoenix,” whether it was because of the well-rounded performances, the slowly poisonous atmosphere, or the many twists and turns throughout the story to keep everything fresh.