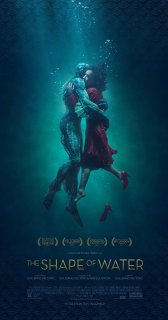 One of the reasons I adore cinema so much is because filmmakers can use it as a platform to say anything they want about the world. Whether they want to talk about how the world needs journalism in “The Post,” make a statement about growing up in a Post-9/11 world in “Lady Bird,” or something as simple and relatable as growing out of adolescence and discovering yourself in “Call Me by Your Name,” film can be a gateway into our society as much as it is into our hearts and souls. But with all of these profound statements and new perspectives on life, we so often forget just how beautiful and joyous film can be at its most basic and simple level.

Sometimes you don’t need to remind the audience of the world we live in or our dilemmas. There are times when the most powerful films are the ones that remind us that there is magic and wonders in this world, and we’re watching one of those right now.

For this reason, I have no problem saying that Guillermo del Toro’s “The Shape of Water” is not only the best film of the year, but one of the greatest fantasies of all time. This is a film built on passion and raw unbridled love for movies in its purest form. Every shot of this film is gorgeous, perfectly thought-out to the point of being visual poetry. The music is phenomenal as it adds an even bigger emotional weight to the story, which is where fantasy and reality blend together flawlessly in a way that only del Toro can. Even performances that range from stellar to some of the most emotionally captivating I’ve ever seen. “The Shape of Water” is an excellent example of why we adore cinema.

The film follows Elisa Esposito (Sally Hawkins), a mute who works as a janitor at a secret government lab in Baltimore. Even though she doesn’t have the most glamorous life, she still makes the most of it, living above a movie theater while spending time with her elderly neighbor Giles (Richard Jenkins) as they watch classic movies and television, and enjoying her conversations with co-worker Zelda (Octavia Spencer) while trying to master the dance moves she sees on television.

But her life becomes very difference when the very controlling Colonel Strickland (Michael Shannon) brings in a top secret specimen into the lab that he’s brought all the way from South America. Elisa quickly finds out this specimen is alive and intelligent, and she develops a close friendship with the creature (Doug Jones) despite the watchful menacing eye of Colonel Strickland.

I would describe “The Shape of Water” as “The Creature from the Black Lagoon” meets “Edward Scissorhands,” with Guillermo del Toro’s unique film style for blending reality and fantasy in a fairy tale-like way. The film harkens back to a time long since passed, admiring some aspects like the simplicity of the time, without shying away from some of the harsher uglier parts of the early 1960s. While at other times, there are moments of true horror that one can only get from a monster movie, blurring the line between whether the true monster is man or creature. All the while never losing its love and passion for movies and its style.

The main reason I think “The Shape of Water” works is due to Sally Hawkins’ performance as Elisa and how she gives the most emotionally gripping and raw performance I’ve ever seen. Every scene Hawkins is in, she is acting her heart out and without ever saying a word. It feels like a silent film performance but with far more emotional weight than any silent role I can remember. There were at least three scenes that almost made me cry in this film, and it was always because of Sally Hawkins breath-taking job as showing us a woman that just wants to have her chance at happiness. Whether she’s bursting with joy, upset beyond all reason, or wallowing in despair, Hawkins gives this role everything she has.

Then again, every single performance in “The Shape of Water” is a standout. Richard Jenkins is lovable in his attempt at trying to find some sort of meaning in his old age, Octavia Spencer gives us her usual fiery attitude that I can’t help but love, even Michael Stuhlbarg plays a scientist who wants to protect the creature and he has a great duality to his character.

But the two other stand outs are Michael Shannon and Doug Jones. Shannon is ruthless, selfish and completely absorbed in his own ego that it makes his evil actions just as entertaining to watch as Hawkins’ performance. Strickland is one of the best villains I’ve seen in a long time and is the slimy glue that holds this film together. Jones plays the creature and adds a charm to the character that this story truly needed. Even under all of that makeup and latex, Jones creates something that is both imposing and surprisingly kind.

Overall, I love every second of “The Shape of Water.” It is bursting with vibrant and colorful storytelling that blends together fantasy, horror and reality in a way that leaves me speechless. The film is ruthless and gross at times, but packs just enough of an emotional punch to make those moments stand out even more. These are all some of the best performances I’ve seen all year and they make this story of love and passion in the face of a ruthless world so much more powerful than it already was. While this may not be a film for everyone, there’s no denying that “The Shape of Water” passion for filmmaking will leave an impression on most audiences as it did with me.