So yeah, there’s a new Godzilla movie out on Netflix. Not only that, it is the first animated Godzilla film and it is the first part in a trilogy of movies that takes a drastically different turn with the series.

So why do I feel like the first installment, “Godzilla: Planet of the Monsters,” was a bit of a disappointment? Well, more accurately, the word I would use to describe this film is “underwhelming.”

As the first part of a trilogy, it does its job of setting up this whole new world of monsters and the conflict our characters face. But it does everything so by the numbers that it doesn’t feel like it has any life to it, especially from these dull and rather emotionless characters. And then there’s Godzilla, who doesn’t really do anything Godzilla-related other than be big and imposing. They could have literally removed the word “Godzilla” from this movie and nothing would have been lost, which is extremely disappointing after “Shin Godzilla” breathed new life into the franchise.

In the late 20th century, the planet is overrun with giant monsters (all of which are Toho monsters from other films including “Godzilla 2000” and “Dogora”), causing the governments of the world to throw everything they have to defeat these monsters. Eventually though, they’re all defeated by the most powerful monster of all – Godzilla. In a desperate attempt to stop the final monster, the world leaders unleash everything they have at Godzilla, launching nearly 200 nuclear missiles at him – they don’t even leave a scratch on him.

Since their last hope failed, Godzilla now roams the planet unopposed, destroying everything in his path without remorse or concern. With the after effects of 200 nuclear missiles looming in the atmosphere and no chance of defeating Godzilla, the human race flees the Earth in a desperate attempt to locate a suitable planet elsewhere, leaving Godzilla the lone ruler of Earth.

All of this is told to us through flashbacks in the first few minutes of the movie, along with humans getting aid from alien races that also want to call Earth their home and want to fight Godzilla. Honestly, this is the most interesting part of the movie – simply hearing about how the human race collapsed in the face of giant monsters and their impossible fight against Godzilla. I want to see that as the movie, at least then we’d get to see Godzilla fight monsters like Dogora and Dagarha from “Rebirth of Mothra II.”

Instead, what we get is a hard cut to 20 years in the future, when the surviving human race makes it to a planet they always thought was going to be their new home, only to find out the surface of this planet is uninhabitable. With the ship running low on supplies and fuel, the leaders calculate that it would be impossible to find another suitable planet before they all died from starvation or running out of oxygen. They come to one conclusion – return to Earth via a subspace warp jump and hope that conditions have returned to normal and that Godzilla is long gone.

So now Godzilla is taking technology directly from Star Trek? I’m surprisingly okay with this development.

As it turns out, the scientists miscalculated how much time would have passed while they were in subspace. They thought only 1,000 years would pass, but it ends up being around 20,000 years and the Earth has changed significantly. The surface is still inhabitable, but it is covered in a thick fog (that turns out to be plant spores that release radiation into the atmosphere) and Godzilla-like dragons fly throughout the skies. 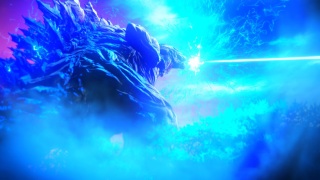 The whole idea of this trilogy seems to be that, while leaving Godzilla unattended on Earth for 20,000 years, he has become the top of the food chain and now the planet bends to his presence. An interesting concept that the film tries to explore, especially when we learn more about how Godzilla has changed the course of the planet and what that has done to him. But they don’t put a big focus on this, instead going for the humans’ struggle to retake the planet and their battle plan against Godzilla.

Everything about these characters feels utterly generic that it feels forced. Our protagonist is an angsty young man that wants revenge against Godzilla for killing his parents and constantly makes dumb speeches about how humanity needs to fight Godzilla to get our home back.

Great, another young adult main character that exists only to even the score against a giant fire-breathing monster! It’s not like that’s exactly the same motivation for most protagonists in the Heisei and Millennium series. Oh wait…

I’m also not a fan of the animation style at all. Everything about it feels block and unnatural, like everyone is a computer with very robotic unrealistic movements. It’s like I’m watching old PlayStation 1 video game cut scenes, not an animated film that came out in 2017. I realize this CG-style is faster and cheaper than hand-drawn animation, but this style has no polish or life to it. None of this film looks good, it is an ugly CG-filled mess.

Now that I’ve officially looked at every Godzilla film and ranked them from best to worst, you’re probably wondering where I would rank “Godzilla: Planet of the Monsters.” Well, after watching this film only once, I would say this film is probably somewhere in the mid-20s, right around “Godzilla X MechaGodzilla” and “Godzilla 2000.” It is not the worst thing that involves Godzilla, certainly not insultingly bad like the 1998 American film or “Godzilla: Final Wars,” but it is so bland and uninspired that I can’t say this is a good Godzilla film either.

Granted, this is just the first installment in a trilogy that tells one continuous story, so we’ve only seen a third of the full picture. For the time being, I’ll cut “Godzilla: Planet of the Monsters” some slack, especially with a reveal at the end that was genuinely shocking, and wait patiently for the final two installments. However, I still feel like the opening flashback was the best part of the film and that should have been the focus of this first entry.

My biggest complaint is that it doesn’t seem to care about what made the Godzilla franchise so endearing and memorable, for-going most monster interactions and instead tell a forgettable story told in the most unimaginative ways using piss-poor animation. If you’re a long time Godzilla fan like me, or even a casual fan of monsters or Godzilla, you probably won’t care for “Godzilla: Planet of the Monsters.” Here’s hoping the rest of the trilogy gets better.