Suppose that you had someone you truly care about tragically taken away from you. They’re not only gone from this world, but the way they were taken would make even the sanest man weep. Now suppose that the person who did this not only got away, but left no evidence or clues behind, so the police can’t do anything would it. What would your reaction be? Who would you be angry at – the person who did it that you may never meet, the police that can’t solve the crime, or would you be frustrated at everything and everyone?

I feel like this is the moral crux of “Three Billboard Outside Ebbing, Missouri,” and provides the driving conflict between its many sides, all of whom have very good reasons for their actions, while also giving each of our characters morally questionable actions. Add in a small-town atmosphere filled with folks who are just as flawed and broken as our leads, and you get a picture is fueled by rage and discrimination. And subsequently, a film that is impossible to take your eyes off of.

Mildred Hayes (Frances McDormand) is a woman who feels like she’s lost everything. Not only is she a divorced mother who has to raise her teenage kids on her own, but her daughter had recently been raped and murdered. The Ebbing police department have done everything they could to track down her murderer and bring him to justice, but after nearly a year there have been no arrests. So, in an act of absolute hatred, Mildred purchases three old billboards on a country road in their town and uses them to make a bold hate-filled statement against the police department. This naturally sparks controversy and talk in Ebbing, especially from the police chief Willoughby (Woody Harrelson) and his racist, violent-prone deputy Dixon (Sam Rockwell). 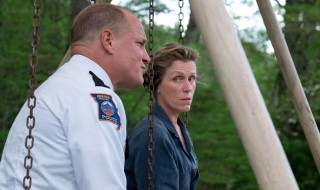 “Three Billboard”‘s strength comes from the moral gray area all of its characters sit in – You root for characters like Mildred because of her fight for her right to say what she wants without fear of repercussions, but at the same time she has no regard for other lives besides her dead daughter and hates everyone that isn’t on her side. Her solution to finding her daughter’s killer is to draw blood of every man in the country over the age of eight and match it with the evidence they got from the scene of the crime. She is fully willing to violate the rights of innocent men and children just to have a slim chance of finding out who killed her daughter.

Then we have the police department, who do seem complacent and removed from these violent crimes, as they go about their lives without continuing the case, focusing inside on the hateful things Mildred is saying about them. But at the same time, Willoughby admits that they’ve done everything they can within the confines of the law and nothing else can be done. They’re not an all-seeing, all-knowing force for their own selfish needs, they’re people with their own fears and hates. Willoughby in particular comes across as a man who feels truly terrible about not finding the murderer, like it keeps him awake at night, and now those billboards are just a constant reminder of his failure.

All of these characters are not true heroes or villains, they make loads of mistakes and discriminate against certain people. But what makes this movie so much more powerful is that it doesn’t have all the answers – What is the proper way the police and Mildred should handle this situation? The movie isn’t really sure, because this is one case that is extremely personal. It’s impossible for these characters to remove attachments and feelings and think only morally and logically. The movie doesn’t pull any punches either, putting everyone’s strengths and weaknesses on full display for us to see.

Of course one of the biggest reason these people come off as so relatable is because of the terrific performances from the three main leads. Francis McDormand deserves all the praise in the world for her performance as Mildred Hayes, and taking an angry, crazy woman and making her cause seem noble and just. I would dare to say this is McDormand’s best performance since “Fargo,” if only because Mildred is the antithesis of Marge Gunderson, and yet McDormand’s role feels just as heartfelt and sincere. Woody Harrelson’s chief of police is calm, but is clearly someone with a lot on his mind. It feels like he’s carrying the weight of the world on his shoulders, which makes all of his interactions with McDormand some of the best scenes in the movie.

And then there’s Sam Rockwell’s Officer Dixon. I have never simultaneously loved and hated any character in cinema as much Dixon, and that’s all because of Rockwell’s bizarre yet honest performance. He has all of the best comedy throughout the movie, whether he’s being pathetic or inept at his job, while also having a good amount of character development that feels welcomed in this town filled with animosity.

Overall, “Three Billboards Outside Ebbing, Missouri” is one of the hardest films of the year to watch, but is also the most rewarding. It paints an honest picture of a small town that is as emotional as it is discriminatory, without giving the audience any clear answers to its morally difficult questions. Each of these characters is a delight, even if they make some questionable choices. I loved this movie and I think it’ll be one of the most talked about films of the year.