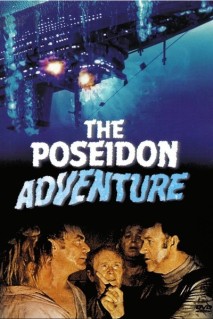 The early 1970s were an interesting time for Hollywood. This was the era when filmmakers could finally tell more hardened and outlandish tales, without having to worry about the harsh restrictions that were present since the beginning of Hollywood’s golden age in the 1930s. This led to the creation of R-rated films and eventually summer blockbusters. But in the middle of all that, a new genre was created – the big-budget disaster movie.

Started by films like “Airport,” “The Towering Inferno” and “Earthquake,” they followed a very simple formula that led to extravagant sequences of tragic events and how a small group of people (typically big name actors) respond under these dangerous and deadly situations. While these types of movies were certainly made before the 1970s, producer Irwin Allen changed this up by adding much more money to give these events the Hollywood treatment and the addition of the all-star ensemble cast, meaning if you weren’t entertained by the effects then you at least had some of your favorite actors working off each other.

And although “Airport” was one of the first films to do this, the one that people keep coming back to is “The Poseidon Adventure,” mostly because of how it takes that genre-type story and flips it on its head, literally. The story follows an old cruise ship, the S.S. Poseidon, on New Years Eve on its way from New York to Athens. As the clock strikes midnight, the ship is hit by an enormous tidal wave, capsizing it.

Very few people survive the initial hit, and the ones that do survive are trapped on a slowly sinking ship. They quickly figure out that the ship has been flipped upside down, and that the only way out is upward towards the bottom (now top) of the ship, through the outer hull. Most of the survivors think this is a crazy plan and that they should just wait to be rescued, but a few people take matters into their own hands. They include an unorthodox reverend (Gene Hackman), an aging police detective (Ernest Borgnine), the sole survivor of the New Years band (Carol Lynley), an old married couple on their way to Israel to see their grandchildren (Jack Albertson and Shelley Winters) and the injured bartender (Roddy McDowall), as they traverse the upside down and sinking ship for their slim chance at survival. 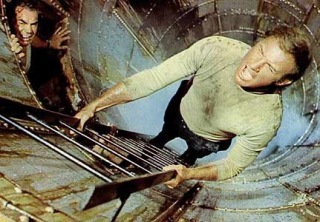 What I enjoy about “The Poseidon Adventure” is that this doesn’t necessarily feel like a group of random stereotypical people throw together to please certain demographics. They all strangely have some things in common that you don’t really think about, like how most of them have been so focused on their careers and plans that they don’t make time for love. Red Buttons plays a hypochondriac that has spent his whole life working, and is now passed the point of finding love, yet he undergoes a personal journey as he develops a friendship with the singer. Jack Albertson and Shelley Winters’ married couple admit that they can’t remember the last time they took time away from work and made time for each other, or even when the last time they said they loved each other. This broken desire for love is actually the driving force behind their motivation to keep going, so that they can have another chance to fix it.

Of course, with our main character being a Reverend, there are constant themes and messages about God and religion, but without being forceful and overbearing. Gene Hackman’s character believes that we shouldn’t pray to God to save us, but to pray to the piece of God inside of you to show you the way. Hackman very rarely mentions God throughout their journey, but continually gives the other the motivation to keep going, to remind them why this is a struggle worth overcoming. He is both nurturing and forceful at the same time, which works amazingly well for this story.

For 1972, these effects and set pieces are wonderfully detailed and creative. They went all out on making this upside down cruise ship feel like its own character, which each room feeling just as dangerous and ominous than the last. Even though this is certainly a character driven piece, the action pieces are just as intense as anything else in the movie.

Overall, “The Poseidon Adventure” is the best example of a disaster movie done right. It takes full advantage of its unique situation while giving us broken yet likable characters that we want to see overcome all these deadly traps. The film has a surprising amount of things to say about love and religion, which makes it worth watching more than once. Even for 1972, this film still looks amazing today. If you want to see where every disaster movie came from, look no further than “The Poseidon Adventure.”