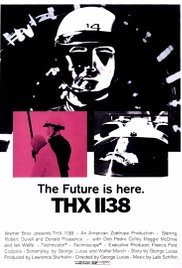 Unless you are a diehard movie fan, the biggest thing to come from this movie is that it gave way to that annoyingly loud introduction to DVDs in the 2000s from THX.

“THX-1138” is George Lucas’ directorial debut and is about as minimalistic of a depiction of the future as possible, with lots of empty white and blank landscapes, with every character wearing the same plain jumpsuit and shaved haircut. Set in the far off future, humans now live a robotic lifestyle underground where their given designated tasks, take pills to suppress emotions, and can no longer have sex. Everything is done automatically and mechanically, including the production of offspring, psychological treatment and even a Mecha-Jesus to act as a confessional. People don’t even have names anymore, just numbers like a bar code.

Basically, imagine “WALL-E” if we went underground instead of into outer space.

The making of “THX-1138” is the most fascinating part of the movie – George Lucas originally made this movie while he was in college but found the final product unsatisfactory. After he graduated, Lucas was taken directly under the wing of Francis Ford Coppola, the director of “The Godfather” movies and “Apocalypse Now,” where Lucas would help Coppola in pretty much every aspect of filmmaking. For one of Coppola’s bigger projects, Lucas basically acted as the “assistant to everything,” but Coppola couldn’t find the best way to pay Lucas for doing all that work. The best thing Coppola came up with was to fund Lucas’ directorial debut entirely. Lucas used this as an opportunity to redo and reshoot his final college project, and this time with a nearly $800,000 budget and A-list actors like Robert Duvall and Donald Pleasence.

Lucas made “THX-1138” as a direct response to the rise of consumerism, with television, newspapers, and magazines forcing products and advertisements down our throats, treating us like mindless drones that will buy anything that’s put in front of us if it has enough pretty colors. The film is also a slam against then-President Richard Nixon, as the villain of the film takes direct excerpts from his speeches to propagate his evil point-of-view.

And that’s about all that’s interesting with “THX-1138” – Everything else is pretty standard for a dystopian science fiction film where everything from emotions to duties to society is handled by computers. Maybe it is because of the blank voids this film uses for backgrounds, or the bland designs of the characters, but because everything looks and feels the same, nothing truly stands out. This movie just feels like one giant shade of gray.

If you’re curious how the creator of “Star Wars” got his start and the his first attempt at science fiction, then give “THX-1138” a shot. But if you’re truly interested in watching a worthwhile dystopian science fiction, look to other more visually interesting tales in the genre and save this one for a rainy day.