If you were ask me which film(s) was my least favorite in the Marvel cinematic universe, I would be quick to point directly at the first two Thor movies. This is because both “Thor” and “Thor: The Dark World” seem at odds with the rest of the Marvel movies and don’t have fun with their ridiculous scenarios. In a way, the idea that the Norse Gods are real should lead to the most creative and awe-inspiring films in the series, yet the first two are so bland and forgettable that it makes them much worse. When you focus more on Natalie Portman and Kat Dennings than the god of thunder, you know you are doing something wrong.

Luckily, every problem I had with the previous Thor movies is fixed with the latest entry, “Thor: Ragnarok,” and we finally get a film that fully embraces its over-the-top ridiculous nature. This movie reduces Thor to his most basic elements and throws away all superfluous material to give us a all-out insane ride that never skips on laughs, thrills, and impressive visuals. Nearly every scene has something memorable, whether that’s a new character that steals the show, the superb acting from Tom Hiddleston or Cate Blanchett, or just the great sense of humor this movie has.

This is best brainless popcorn flick of the year. 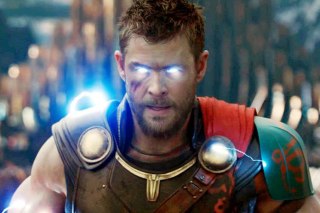 This film takes place during the events of “Captain America: Civil War,” when Thor (Chris Hemsworth) returns home to Asgard after failing to locate any of the infinity stones, where he learns that his adopted brother Loki (Tom Hiddleston) has been disguising himself as their father Odin (Anthony Hopkins) for a while. The two head to Earth to find Odin, who foretells of Hela’s return and her intent to retake Asgard. As Odin’s power diminishes, the goddess of death Hela (Cate Blanchett) emerges and effortlessly destroys Thor’s hammer and casts the brothers to some trash planet while she heads to Asgard to claim the throne as the rightful heir. Now it’s up to a devastated Thor, a treacherous Loki, a fallen Valkyrie (Tessa Thompson), and a familiar green rage monster to retake Asgard from Hela before she destroys all nine realms with her undead army.

I would like to applaud these filmmakers for so drastically altering the tone and atmosphere of the previous Thor movies to a more light-hearted and joyous tone, while still keeping the same sense of scale and grandiose. Gone are characters like Kat Dennings’ Darcy and Stellan Skarsgard’s Erik Selvig, as well as a film that relies too much on Thor just swinging his hammer around a lot. Instead, we get a film that is still engrained in Norse mythology but has some of the best comedic writing of the entire Marvel cinematic series. Even the previous films’ over-reliance on Loki stealing every scene is toned down here while Hiddleston still turns in a great performance.

What I enjoyed the most about “Thor: Ragnarok” was its sense of humor. I sat in a fairly packed theater, and I probably laughed out loud more than everyone else combined. There are plenty of new characters that were designed specifically for laughs, especially the gladiator Korg, an alien made entirely of different types of rocks with a soft spoken British accent who always seems to be on the receiving end of bad timing. Another standout is the eccentric and kookey ruler of the planet Thor and Loki get trapped on, the Grandmaster, played by the always awkwardly hilarious Jeff Goldblum, who turns in his best performance since “Jurassic Park.”

The film takes every chance it has to tell a joke or point out the ridiculous nature of its setup. Most of the jokes worked for me, though there were a few that missed their mark.

On top of that, “Thor: Ragnarok” goes all-in on the crazy and goofy to give audiences a movie that is, above all else, fun. How can anyone hate a movie where the Hulk fights a giant wolf demon on a Technicolor rainbow bridge while Led Zeppelin is playing? How can you not have fun with Thor and Doctor Strange messing with each other? This movie had me grinning the entire time and I loved every second of it.

“Thor: Ragnarok” is the best escapist film of the year, packed with impressive visuals, great performances all around, the standard great sense of humor you expect from Marvel films nowadays, and is never short on thrills and fun. It is goofy and over-the-top, but never to the point where that gets in the way. This is some of the most fun I have had with a superhero film since “Guardians of the Galaxy,” and one I wouldn’t mind seeing again soon.