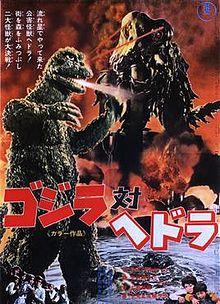 If the original “Godzilla” is the “Citizen Kane” of giant monster movies, then “Godzilla vs. Hedorah” is the art-house equivalent for daikaiju films. This film is abstract, filled with all sorts stylistic choices from its director Yoshimitsu Banno that screams of the 1970s and Japan’s counter culture. There’s a lot of it that still doesn’t make any sense to me, but helps contribute to its style over substance approach to make it the most unforgettable Godzilla film.

To appreciate “Godzilla vs. Hedorah” fully, let me set the stage – In 1971, Japan was suffering from a massive pollution problem. The country had become incredibly industrialized, and Tokyo was one of the fastest growing cities in the world. Millions of pounds of waste were produced every day, and the government did have a viable way to getting rid of it, dumping trash and nuclear waste into the ocean, while the air around most major cities became toxic. It got so bad in city that most people living there developed asthma.

If life in America was bad in the 1970s due to pollution, it was even more unbearable over in Japan.

On top of that, this was the point when Japan’s youth fully embraced its psychedelic side and experimented with all sorts of drugs while getting advice from an article to get away with it in school, music, and ways of rebelling.

When director and writer Yoshimitsu Banno visited the city of Yokkaichi, he saw the landscape covered in black smog and the ocean filled with foam from dumped trash and detergent. After that, he started formulating the idea of an alien monster that fed off all of our pollution and how it would grow unstoppable because of our arrogance towards waste.

When I learned this was how “Godzilla vs. Hedorah” was created, I immediately thought about how similar that is to Tomoyuki Tanaka’s experience with creating the first “Godzilla” – Looking down at the ocean from a plane and thinking of a giant monster rising out of the sea. As we’ll find out, this isn’t the only similarity between these two films.

Banno submitted his idea of an alien monster that transforms because of pollution to Toho and they loved the idea, but of course thought the movie would sell better if Godzilla was involved. Toho gave Banno free reign with creative control over “Godzilla vs. Hedorah,” but gave him an extremely limited budget and only 35 days to shoot the movie, including the monster sequences. This allowed Banno to try a few things that had never been tried in a kaiju film before.

As a result, “Godzilla vs. Hedorah” screams of the 1970s, filled to the brim with counter culture ideals and movements, like the underground dance sequence where there is clearly some trippy drugs in the air as a woman in a skin-tight body suit and long hair singing to a large group of teenagers. Scenes like these are typically followed by trippy or odd sequences, like one of our main characters, Yukio (Toshio Shiba), imagining that everybody in the club has fish masks on while they’re partying.

Then there are just strange sequences that make no sense at all. There are three short animated scenes, showing Hedorah’s growth and how he’ll take over the world. At one point, Hedorah flies through the metal frame of a building, which is followed by the building collapsing in on itself with no sound whatsoever. Or a scene late in the film that is framed like the opening of “The Brady Bunch,” with multiple screens that show people outraged about the government not doing enough to stop Hedorah, as well as one shot showing a baby trapped in a pile of sludge.

I don’t think anybody will complain when I say “Godzilla vs. Hedorah” is the weirdest Godzilla film. And yet, I honestly love this film for its odd sense of unmatched style and brutal honesty against how the government was handling the pollution problem.

There isn’t much to the plot of this film – A local doctor discovers an odd-looking tadpole-like creature that turns out to be from a much larger monster that has been attacking everything out at sea, in particular oil freighters. The monster leaves a wake of pollution and destruction in its path and continues to grow as he takes on more trash and toxic material. The doctor eventually finds out this creature came to Earth on a comet from another galaxy and has been slowly but surely growing larger off of our pollution. He suspects that if this monster, nicknamed Hedorah, is left unchecked, it could wipe out spread a giant wave of pollution over the planet and kill everything.

So how does Godzilla fit into this? This is the first film that officially makes Godzilla a planet-saving hero. In the first portion of the Showa series, there was no doubt he was the villain. After “Ghidrah, the Three-Headed Monster,” there was a bit more ambiguity about who Godzilla was fighting for, but leaning more so towards fighting for himself. But now Godzilla is a super-hero for all of Japan, coming to our rescue to stop the threats we cannot hurt. In this case, our introduction to Godzilla is a breath-taking shot of him rising with the setting sun and roaring into the distance, followed by him blasting the waste-filled ocean with his atomic breath.

One aspect I find truly fascinating with “Godzilla vs. Hedorah” are its many similarities to the original “Godzilla.” In particular, Hedorah’s introduction is eerily similar to Godzilla’s introduction – a monster that lurks beneath the sea and attacks unsuspecting cargo ships that causes a national panic. On top of that, Hedorah represents the biggest concern of the Japanese people at the time, and their growing fears of pollution affecting their lives, much like the original Godzilla reflected the world’s greatest concerns in the 1950s over nuclear weapons.

Hedorah is a terrifying monster, looking like a massive pile of sentient sludge aside from two giant red eyes. He takes on multiple forms and each stage is more striking than the last, especially his final two stages, a flying form that uses toxic gas as propulsion and an utterly massive from that reigns supreme over any other Godzilla monster from the Showa era. His attacks consist of firing acidic sludge balls and his corrosive body that continually gets stronger. This makes for one of the most difficult fights Godzilla has ever had.

As for the monster fights, these are some of the more brutal scenes in the entire series. Starting from the first fight, we have Godzilla throwing Hedorah around like a rag doll that sends acidic sludge all over the city that has disastrous results. In the final battle, Godzilla loses one of his eyes, all the skin on one of his hands and is dropped into a giant pile of Hedorah’s sludge. Hedorah’s composition and fight style makes for some of the more imaginative scenes involving Godzilla, especially since his atomic breath has no effect on the space monster, meaning Godzilla has to get close to a monster made of acid and smog.

Hedorah ends up dominating most of their fights, especially after their first encounter, so it is serial to see Godzilla trying so hard to defeat a monster and getting absolutely no where. He gets about as desperate and feisty as Anguirus did against King Ghidorah in “Destroy All Monsters.” These fights don’t have the best cinematography of the series, but they’re different enough that I can’t help but admire them.

And that’s this film in a nutshell – This is the weirdest, most “out-there” Godzilla movie and I adore it for that reason. All of its little eccentricities and odd moments are honestly the highlights of the film, as Yoshimitsu Banno puts all of the problems and style of the Japanese in the 1970s out there for us to see in all of their abstract and bizarre behavior. These scenes take what would have been an average monster movie and turns it into one of the best examples of daikaiju art.