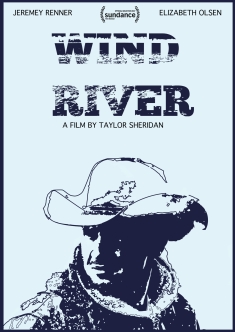 Writer/director Taylor Sheridan, who previously scripted the fantastic Sicario and Hell or High Water, makes his directorial debut here with a haunting and taut thriller. Completing what Sheridan has called his “American Frontier” trilogy, Wind River takes place on the Indian Reservation up in snowy Wyoming. The brutal and vast cold setting of this film fits perfectly with the story and themes therein. The story begins with a young woman running barefoot outside on the reservation in the middle of the night. Eventually, her body is found and a single FBI agent (Elizabeth Olsen) is sent up to investigate the woman’s murder. She enlists the help of the reservation sheriff (Graham Greene) and a local tracker/hunter, Cory (Jeremy Renner), to help her navigate the land and the people.

While the film begins as a slow-burn mystery, it moves along at a steady pace and comes to an almost abrupt and brutal finale. As with much or Sheridan’s work, his films focus primarily on the characters themselves while seamlessly weaving a very tense crime drama around them. There is time to sit with the characters and get to know them, most notably Cory. This is Renner’s best performance since 2009’s The Hurt Locker, with Cory really being a character he can dig in to. There isn’t a note or performance here that rings false. With a great cast surrounding Renner including Olsen, Greene, Gil Birmingham, and Jon Bernthal in a particularly memorable role. 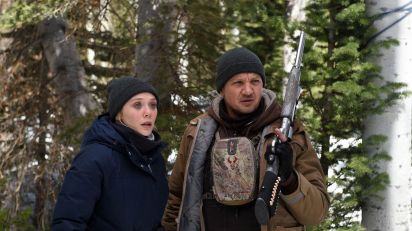 If you are looking for a more personal and realistic film amid the chaos of summer blockbusters with too many special effects and an incoherent story, then Wind River is very much the eye of the storm. It’s a character-focused thriller that delivers on action without taking away from the story. Taylor Sheridan is definitely a filmmaker to keep an eye on, with this being an exceptionally strong debut for his directorial skills.