If you asked me what my favorite animated film of the 2010s is so far, I would say “The Lego Movie” without any hesitation. Aside from one of the most visually stunning animated movies of the last decade, as well as having a visual style that no other movie has ever had, it has this massive sense of imagination and wonder where you feel like anything could happen. The movie even has a fantastic twist that makes the whole movie far more understanding and heartwarming.

It’s a movie where Batman, Star Wars, pirates, and astronauts obsessed with building space ships all set out on this massive adventure across equally imaginative landscapes. How can anyone hate this movie? Even “The Lego Batman Movie” still had this great sense of wonder and scope while still doing its own thing by acting as a love letter to everything Batman has ever done.

Which is why it pains me to say “The Lego Ninjago Movie” is such a disappointment. Not only does the film mostly limit itself to action movie clichés, but it does little with its Lego-setup, never fully utilizing that unique concept to its full potential. The movie feels like a 2-D animated kids adventure flick that was converted into a Lego movie at the last minute.

Told through the perspective of an old antique shop keeper (Jackie Chan), he tells a little boy the story of Lloyd (Dave Franco), a Lego teenager who lives in Ninjago City, a relatively peaceful metropolis except for the occasional attack from the evil Lord Garmadon (Justin Theroux), Lloyd’s father. But everything Garmadon attacks the city, the Ninjago ninjas are always there to stop his evil plans with their giant mechas. Lloyd is the Green Ninja of this group of six ninjas, trained by Master Wu (also Jackie Chan), who face their toughest battle yet when their plan to finally defeat Garmadon goes horribly wrong.

Part of the problem is that most of these characters leave no impression on me. Most of the ninjas get little to no screen time or development, outside of Lloyd, and are mostly delegated to churning out one-liners or there to fight the bad guys. Lloyd is irritating at times and average at other points. The relationship with his father gets grating especially when the film forces hacky father-son moments near the end of the film.

The only character I enjoyed in the movie was Zane (Zach Woods), the ice ninja of the group. He’s a robot, programmed to act and think like a teenager, which leads to the funniest lines in the movie. He tries to act like he has all these problems every other kid in high school has, only to find out the way his “mother” yells at him is by screaming the old internet dial-up noise. He’s like a comedic-version of Data from “Star Trek: The Next Generation.”

This movie would have been so much better if Zane had a bigger focus or if he were the main character in general. He has more quirks and charm than Lloyd does, so that would have at least saved the movie. Instead, he spends most of the time in the background with an emotionless face. This makes it even weirder in the later parts of the movie when the ninjas need to concentrate and calm their minds to gain new powers and they never bring up the fact that one of them is a robot. 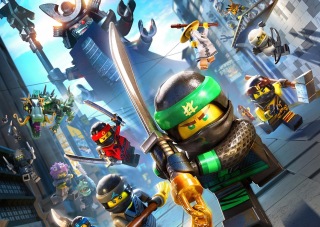 The biggest problem with “The Lego Ninjago Movie” is that it does not take any chances. The reason the previous two Lego movies stood out is because they tried to do so many different things with their characters and plot, some things that no other movies have done before in terms of scope. But this movie is so straight-forward and by-the-books. Even from the opening scene where Jackie Chan explains how to look at something from a new perspective, the point is made that this is your standard animated kids film with little to no surprises.

As a kids movie, “The Lego Ninjago Movie” is fine. It is bright and colorful with a fine story that will keep kids entertained. But as a fan of the Lego movies to this point, I feel let down by this film because it lacks that same grand sense of wonder. The film does not take a piece of plastic and make a grand adventure out of it for people of all ages, it just makes an average yet clichéd little kid movie.