It’s been more than three years since “Kingsmen: The Secret Service” came out and my opinion on the movie has changed slightly. In my initial review, I talked about it is a smart yet stupid action movie with a sense of class and dignity to their mission to save the world. Since then, while I still think there’s an air of class to the majority of the movie that you do not get from other dumb popcorn flicks, the scene in the church is way too much and really takes the audience out of the movie. Even if that’s the part everyone remembers, it was still unnecessary and went against the atmosphere and tone of the rest of the film.

Well, with the sequel, “Kingsmen: The Golden Circle,” imagine that church scene but stretched out to nearly two-and-a-half hours combined with an unbelievably cynical and hateful attitude towards all living creatures. That should give you an idea of how disappointing and off-putting this movie is.

The main thing this movie wants to stress is over-stylized action or violence, but does so in the most asinine or mean-spirited way possible. Even from the opening scene, we’re reintroduced to our lead character Eggsy (Taron Egerton) through a CGI car chase sequence through London, where we quickly learn the whole “manners maketh man” point of the first film has gone out the window just to showcase flashy action sequences.

Throughout the movie, we’re subjected to multiple cases of our “heroes” doing some really terrible things, like when Eggsy has to use a condom tracker on an unsuspecting woman by any means necessary, or nearly drowning a former colleague (Colin Firth) to job his memory.

I can forgive the utterly ludicrous and stupid plot of using recreational drugs to take over the world, but what I cannot forgive is how negative and horrible these people can truly be. This is not fun to watch, and feels more like an exercise in patience and strength of will.

The only scene I enjoyed in “The Golden Circle” came near the end of the film, after Colin Firth’s character has returned to his normal spy-self and Eggsy, his former apprentice, tells Colin that he has a girlfriend now even though it’s against Kingsmen protocol. Colin, usually being the stick-in-the-mud who always sticks to regulations, tells Eggsy about what he felt when he was dying – nothing. No fond memories, and no images of loved ones, because he did not have any. At that moment, he realized that emotional attachments are not a weakness, they make life worth living.

And this wonderfully touching and poignant moment is immediately followed up with this films’ equivalent of President Trump condemning everyone in the world who has ever taken recreational drugs to a slow and painful death and then calling himself a hero for doing so. Look, I understand that Trump is, for lack of a better term, “Trump” (and to keep politics out of these movie reviews), but the scenes with the President in this movie are painful to watch. I do not care what your stance on Trump is, but this movie is made so much worse because of its lack of empathy, which can be traced back to these President scenes. 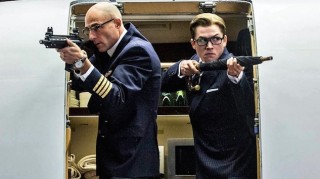 The other part of “The Golden Circle” that gets me riled up is how it tries to build up having an all-star cast with dozens of big name stars. Channing Tatum is in the movie for all of five minutes, nor does he really do anything cool. Jeff Bridges is in the movie for about three minutes and the most exciting thing he does is throw a cowboy hat. Halle Berry has a few scenes but spends most of it staring at a computer screen and reading off reports.

And yet the “star” that gets more screen time than all three of these great actors put together, but was barely mentioned in advertising, is Elton John. I swear Elton John is onscreen more than Colin Firth. He supposedly plays himself, but this version of Elton John curses up a storm and threatens to fight several bodyguards and scientists. His inclusion would have been fine if he did not have such a prominent role and have so many speaking lines that were clearly written by a screenwriter instead of Elton himself. This version of Elton acted more like Deadpool than someone whose been knighted by Queen Elizabeth.

If you’re going to have someone play themselves in a movie, give us the genuine article, not some fantasized idea of that person.

There is very little I enjoyed about “Kingsman: The Golden Circle.” If the film was not boring me with its popcorn-flick science or unnecessary plot twists, it was being unbelievably cynical, taking all the drive and passion out of the action sequences. It tries to throw everything it can at the screen and hope that something sticks, only for most of it to miss the screen entirely. If you’re interested in seeing this film, save yourself the trouble and rewatch “The Secret Service” instead.