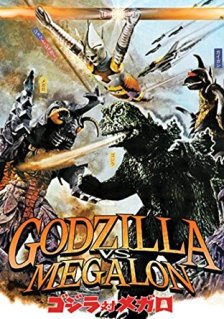 These next two Godzilla films have way more in common for me than they probably do for most people. Not only were numbers 20 and 19 made less than a year apart, they have the same director, both involve aliens using monsters to take over the world while Godzilla comes in to stop them, they were made on the cheap, and are the only two Godzilla films that fall into the “so bad, it’s good” category. To me, “Godzilla vs. Megalon” and the next entry in our countdown, “Godzilla vs. Gigan” are inseparable.

“Godzilla vs. Megalon” is one of the last entries in the first series of Godzilla films, known as the Showa series. At this point in the series, these films were no longer aimed at the general film-going audience, but little kids who were more used to Saturday morning cartoons about super heroes fighting off bad guys. And this film fully embraces that attitude with its pleasant exterior, convoluted yet silly plot, and the way Godzilla is framed as a super hero instead of world destroying menace.

This film was made on an extremely tight budget, far smaller than most other Godzilla films, and was reportedly filmed over the course of three weeks. In fact, originally this wasn’t even supposed to be a Godzilla movie, but was going to be a solo film about Godzilla’s side kick, Jet Jaguar, but Toho thought that kids wouldn’t be sold on just Jet Jaguar, so they included Godzilla at the last minute.

Interestingly enough, the design of Jet Jaguar was supposedly created by some kid in elementary school. Toho let kids submitted their entry for Jet Jaguar’s design, and this is the look they choose – A robot that looks like Jack Nicholson wearing sun glasses and a Mister Rogers sweater. Oh, and Jet Jaguar can change sizes, between being human-sized and giant monster-sized…and yet, Jet Jaguar supposedly programmed himself to do that, even though he’s only equipped to do remedial work, so how he’s able to change size on a whim is anyone’s guess.

Are you starting to see why this falls into the “so bad, it’s good” category?

The plot of the film begins with a real world issue at the time – underground nuclear testing. It turns out these tests had disturbed an ancient race of people that had been living underground for millions of years in the city known as Seatopia. These nuclear tests have destroyed more than a third of their country, and now they wish to retaliate against the surface dwellers by unleashing their giant monster to give us a good butt-whooping. Their monster is the cockroach monster that has Christmas-tree drills for hands and can spew napalm, Megalon.

Their way of unleashing Megalon is through interpretive dance and a stern talking to from the Seatopian leader. They also didn’t seem to have a solid plan once Megalon reached the surface, outside of cause a general panic and a little destruction.

So a film that was motivated by the horrors of underground nuclear tests has quickly devolved into the ancient ancestors of Easter Island unleashing a bug monster that can’t be tamed without the help of a Jack Nicholson-looking robot and will cause some mild inconvenience in Tokyo. I would say this is the dumbest plot of any Godzilla movie if it wasn’t so hilariously bad that I actually have fun with it.

The first half of the film is spent with the inventor of Jet Jaguar, Goro Ibuki (Katsuhiko Sasaki), his kid brother Rokuro (Hiroyuki Kawase) and Goro’s best friend Hiroshi Jinkawa (Yutaka Hayashi), as Seatopian agents hunt the three of them down to gain access to Goro’s lab and get control over Jet Jaguar, which the Seatopians plan to use as bait for Megalon. Goro claims to have created Jet Jaguar, but doesn’t seem to understand how he works, acting genuinely surprised when he grows, knows how to fight giant monsters, and doesn’t listen to his commands. Rokuro is your typical kid character with an annoyingly high-pitched voice and upsettingly short shorts for a little boy, something you’d see often in the Gamera films at this same time. The friend Hiroshi, on the other hand, is the true badass of the film, always engaging the Seatopians in a fight and often pursuing them in car chases, leading to an excellently hilarious chase scene down the side of a mountain and a large flight of stairs.

Eventually, Goro and his gang are able to get Jet Jaguar away from the control of the Seatopians and tell him to go to Monster Island and bring Godzilla back to fight Megalon. Upon hearing that Jet Jaguar is getting Godzilla, the Seatopian controller decides to call up the leaders of the Space Hunter M galaxy (I guess he has them on speed dial) so they can lend him Gigan to fight Godzilla.

I’ll give my thoughts on Gigan next time, but let’s just say that he and Megalon are two peas in a pod – outrageous designs that scream of the 1970s, but are ultimately both as dumb as a bag of giant hammers. They work fairly well off of each other, as far as evil mutant monsters go, and it makes for a fairly entertaining fight between the two of them and Jet Jaguar.

Of course, Godzilla eventually shows up (though he takes his sweet ass time to swim from Monster Island to Japan), and we have ourselves a two-on-two monster battle. But Godzilla’s fighting style is a little different from the previous movies. Instead of mostly using his strength, claws and atomic breath, Godzilla uses…kung-fu fighting and props.

If you were ever wondering what it would be like if Bruce Lee was underneath the Godzilla suit, here is your answer. 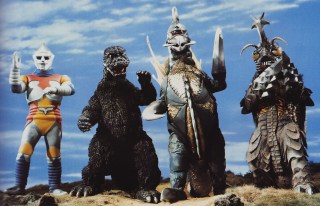 Honestly, the fight between these four monsters is pretty entertaining, in much the same way the final battle in “Godzilla vs. Space Godzilla” is fun to watch – it takes up the entire last third of the movie and leads to a few clever scenarios. My favorite part is when Gigan and Megalon trap Godzilla and Jet Jaguar in a ring of napalm fire, something Godzilla would normally be able to walk through no problem, but instead Godzilla just rides Jet Jaguar out of the fire and finally uses his atomic breath on the two villain monsters. It is exactly what I would expect from an over-the-top and silly monster movie.

I should also note that about a third of the monster scenes in “Godzilla vs. Megalon” are all stock footage from previous Godzilla and Toho monster movies. That makes sense, considering this film had to be made in three weeks and I don’t mind it nearly as much here as I did in “Godzilla’s Revenge.” The stock footage isn’t incorporated very well though, since one scene has Megalon attacking some jets, but the stock footage shows Gigan’s hook hands destroying the planes.

But in the end, I have a ton of fun with “Godzilla vs. Megalon.” It is by no means a good movie, and might be one of the worst put-together Godzilla films. But it never takes itself seriously in the slightest and offers a lot of stupid, over-the-top, cheesy moments that I can’t help but crack a smile at, especially Godzilla’s now-infamous tail slide.

However, if you’re going to watch “Godzilla vs. Megalon,” there is absolutely a definitive version that makes the viewing experience even better – the “Mystery Science Theater 3000” version of this movie. MST3K riffed on two Godzilla movies, and this one absolutely deserved it, but their jokes only enhance the already ludicrous plot and monsters. As far as I know, there are no cut scenes in the MST3K version, so you get to see the full movie, plus some of the best casual riffing Joel and the bots did in the early seasons of the show. 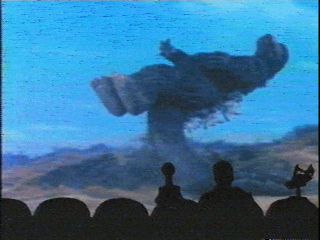 Overall, this is my go-to definition of the “so bad, it’s good” movie. All other films that are hilariously awful are compared to “Godzilla vs. Megalon” for me. This movie is barely held together by scotch tape and bubble gum, has the strangest and most outlandish plot of any Godzilla movie, is centered around a dopey-looking robot that can’t even be understood by his creator, and features a monster that knows kung fu. How can you not at least enjoy the absurd nature of this crappy movie?