Any movie that has a musical number featuring dancing triplet babies that talk about buying a gun they can shoot their other siblings is at least worth a watch in my book.

That, and it is the only movie I’ve ever seen that combines musicals and film noirs. “The Band Wagon” literally has a sequence that plays out like a hard-boiled detective story, complete with femme fatales and over-the-top cheesy narration, while it plays out like ballet with elaborate dance sequences.

I’m not sure I need to say anything else – Babies that want guns and musical film noirs. If that does not peak your interest in “The Band Wagon,” nothing will.

Or it could be that “The Band Wagon” is one of the last big musicals for Fred Astaire, as he plays a role that he was becoming more and more every day – an aging film star that had been forgotten by the Hollywood system and was looking for one last shot to remain in the limelight. Astaire goes all out on his musical numbers, especially one early on in the film where he dances around while getting his shoes shined and playing carnival games. 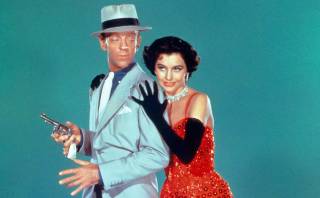 If my description of these events sounds odd, it’s only because this movie is odd. The musical numbers are intricate and elaborate, while fully embracing the insane situations, including the now famous “That’s Entertainment!” number that seems like a cut scene from “Singin’ In the Rain.” My personal favorite number is the aforementioned film noir musical bit, if only because I’ve never seen two genres that have nothing in common work so well together.

There are slow parts to “The Band Wagon,” but when this movie gets good, it is impossible to take your eyes off the screen.