Now that we’ve got the disrespectful and terrible Godzilla movies out of the way, we can move to just the terrible ones!

These next three or four entries are all ones that are simply awfully put together movies that are mostly harmless, but I would still rather watch two hours of C-SPAN than turn on these Godzilla movies again. Of these entires, the worst of them is my pick for the most boring entry in the series – “Godzilla Raids Again.”

This one was made less than a year after the release of the first Godzilla film in 1954 and is the only other movie to be shot in black and white. The film also sees the introduction of Godzilla’s long time ally, Anguirus (or Anglias, or Angurus, or Anguillas…he has more names and pronunciations than any other Toho monster), the spiky-backed Ankylosaurus that seems to be the only sticking point from this film.

Set roughly a year after the events of the first film, when the first Godzilla was killed by a chemical weapon known as the Oxygen Destroyer, the world is shocked to learn that there is not only a second Godzilla but another monster entirely, noting that these two kaiju love to fight each other. The forces of Japan scramble to come up with a solution to fight off the two monsters, or at the very least keep them away from Japan.

But that’s not the important part of the film, because far more than half of “Godzilla Raids Again” is spent with Shoichi Tsukioka (Hiroshi Koizumi) and Koji Kobayashi (Minoru Chiaki), two airplane fishing scouts, and their every-day drama. They both live in a small fishing town in a tightly-knit community, Shoichi has a girlfriend whose a radio operator and Koji is terrible with the ladies. They’re the ones who find Godzilla and Anguirus on a remote island when Koji’s airplane is forced to make a water-landing.

Are you starting to see why “Godzilla Raids Again” isn’t the most well-received among Godzilla fans? 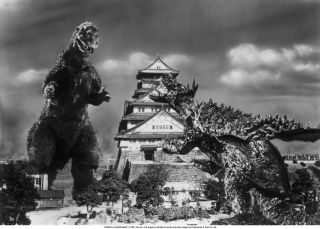 Godzilla feels like an after-thought in this movie, with the main focus being some pilots. It would be one thing if we cared about these guys and their struggles, but the film never gives us any reason to like or give a damn about them. Shoichi is too busy talking to his girlfriend that half the time he doesn’t do his job, and Koji is dim-witted and too focused on finding love. These elements would be fine if this was just a Japanese melodrama about finding love in a small fishing town, but this is the direct sequel to one of the darkest and most disturbing giant monster movies of all time. Everything involving these guys doesn’t feel like it belongs here.

While “Godzilla Raids Again” has one of the shortest runtimes of any Godzilla movie, just 82 minutes, the pacing is excruciatingly slow. While we get a glimpse of Godzilla and Anguirus fighting at the beginning, it lasts all of ten seconds, and then we don’t see the two again for what feels like an eternity. We’re given a recap of the events of the first film through recycled footage, though with no audio or music, so it’s about as exciting as your uncle showing you slides from his vacation to Mt. Rushmore. Then the military spends about ten minutes trying to come up with a plan and every single general takes his sweet-ass time to give his two cents.

And you would think that once Godzilla and Anguirus show up that would be the focus of the movie. But nope, there is a long scene dealing with prisoners trying to escape while being transported, only to set most of Osaka on fire, and Shoichi’s girlfriend constantly looking at the destruction from about five miles away at a safe location. To be fair, this leads to the only cool shots of the movie, as we slowly but surely see Osaka get engulfed in flames. 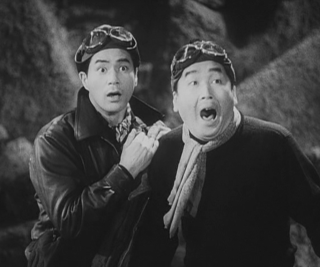 My point is that it takes this movie more than half of its runtime before we finally get to see Godzilla and Anguirus throw down. More than 45 minutes of slow, dull, uninteresting conversations that feel like they don’t amount to anything.

Even when we do get to the monster fights, the camera work gets strange. When focusing on solo shots of the two kaiju, their movements seem slow and lumbering, as they should be. But when the two are forced to fight, the camera movement speeds up to 11 and every little movement feels unnatural, like Godzilla and Anguirus are on drugs.

But strangely enough, after the two fight for a little while, Godzilla actually kills Anguirus and just leaves Osaka. Yet the film isn’t over. In fact, there’s still about 25 minutes left. And we end up spending most of with the pilots again and their drama. The big climatic battle between your two monsters wasn’t the end of the movie? We had to get 20 more minutes with these forgettable characters before one last showdown with Godzilla?

The film could have ended after everything in Osaka and our torture could have ceased! But hey, we had know if Koji ended up getting a girlfriend, right?

This leads to one last scene with Godzilla where the local fishing pilots literally start bombing the snowy mountains around him to encase the monster in ice. Let that sink in for a moment – you plan to surround a giant fire-breathing irradiated lizard with snow and ice. Yeah, I’m sure that will hold him for all of five minutes. Also this one mountain seems to have an endless supply of snow, since I swear these guys bomb the mountain about fifty times, each one as uninteresting as the last one.

There’s one last thing I’d like to point about “Godzilla Raids Again” and that is the English dub. I won’t normally talk about the differences between the Japanese version and English version in these reviews, but this one deserves special mention. Mostly because, in the English dub, all mention of Godzilla is removed from the movie. Instead, the movie is called “Gigantis, the Fire Monster” and Godzilla has now become the titular Gigantis. They also replace most of Godzilla’s roars with Anguirus’ roars, but don’t do anything with Anguirus’ roars, making it twice as confusing when you cannot tell which monster is roaring.

The explanation the scientists give for this is to say that Gigantis and Anguirus are of the same species. I don’t know if any of these scientists looked at a picture of these two monsters that look nothing alike or if they’re blind, but in any case I’m calling bullcrap.

In fact, I call bullcrap on the entire English dub; it takes an already slow, boring movie and makes it even harder to get through, with two monsters that have the same roar and below-average dubbing for the 1950s.

Overall, “Godzilla Raids Again” is not only the most boring Godzilla film, but also the most forgettable. You could marathon the entire series but skip this one and ultimately nothing of value would be lost. There are no note-worthy scenes here, the characters are unlikable, and the pacing is atrocious. As a direct follow-up to the first Godzilla film, this film misses all the marks.