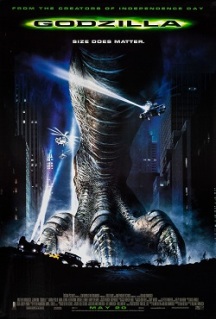 Part of me feels like I shouldn’t be reviewing this movie. This one is so far away from how other Godzilla films feel and act that it should not count. The 1998 “Godzilla” is like an alien trying and failing to blend in with a group of humans. But, it has Godzilla in its name and a monster that uses bits of Godzilla’s roar, so I guess I’ll give my thoughts on the film.

I remember going to see “Godzilla” in theaters when I was eight years old on Memorial Day. I had been excited to see this movie for months, thinking how amazing it would be see my favorite monster on the big screen. Then I went to the theater and was almost immediately disappointed.

Keep in mind that I was in second grade at the time, so it was very easy to keep me entertained. Just put on something pleasant or slightly intriguing and I won’t move for hours. But even as a little eight year old, I was so bored and uninterested in “Godzilla” that it still blows me away to this day. How could this film mess up one of the most simple concepts – have Godzilla rampage through New York City and have lots of eye-candy visuals. That shouldn’t be hard for the director of “Independence Day,” Roland Emmerich, which had some of the most memorable movie images of the 1990s when the Empire State Building and the White House were destroyed. But like “Godzilla: Final Wars,” the filmmakers found a way to screw it up royally.

The film follows Dr. Niko Tatopoulos (Matthew Broderick), a scientist who is researching the growth rate of earthworms around Chernobyl (fascinating work, I’m sure). He gets called in by the military to study contaminated areas in Panama and Jamaica that had recently been attacked by a giant monster. Unbeknownst to Niko and the military that same monster suddenly shows up in New York City and makes a slight mess.

And when I say “slight mess” I’m not being sarcastic – to start things off, the monster only slightly damages the harbor around NYC. Throws a fishing boat here, knocks part of a roof off a building there, nothing that cannot be fixed in a day or so. I’m not even sure Godzilla killed anyone in first attack on the city.

So the military is called into deal with the monster, and they do a real bang-up job at first. To start things off, they lose track of the beast almost immediately. In a city filled to the brim with vast skyscrapers and state-of-the-art technology, you lose track of a giant dinosaur. This thing isn’t like a spy that can easily blend into the background of a city with eight-million people, it is a monster the size of a small building. The film wants you to believe this is because the monster is an expert in stealth, but I don’t buy that for a second. It’s because this military sucks at their job. 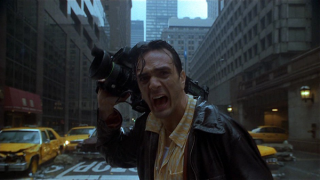 Don’t believe me? Then I give you exhibit two of the moronic military and wasted potential – After they have successfully drawn the monster out of hiding, they panic and open fire all their weapons on the creature…except every single missile and bomb misses and destroys the surrounding buildings. A whole squardon of helicopters chases down the monster through the city, while the monster just casually avoids the buildings causing no real damage, and the military continually fires everything they have got only to miss and destroy major landmarks in the New York area, like the Chrysler Building.

In other words, it’s not the monster that destroys New York, but the incompetent military that never bothers to stop and aim at their target.

But anyway, let’s address the elephant in the room – I have yet to refer to the monster in this movie as Godzilla. That’s because, for all intents and purposes, it’s not Godzilla. You don’t need to be a detective to look at this monster and the classic design of Godzilla to see these two look absolutely nothing alike. This monster looks and behaves like a slightly bigger T-Rex with a few spikes on its shoulders. It is fast, hunched over like most dinosaurs and loves to eat fish. You know, those classic Godzilla traits!

I’d be willing to forgive all that if we got the two things Godzilla is mostly known for – his indestructibility and ability to breathe fire. And we don’t get either of those. The best we get is that he can breathe a flammable gas that can cause a bit of fire when exposed to a flame, but that’s not even close to being the same thing. Then, as the film ends, the mosnter gets caught in Brooklyn Bridge, giving the military a clean shot at him, and he gets killed by just four or five standard missiles.

This Godzilla is pathetic, with a lame design and no cool abilities that make him standout. The only reason he’s remembered today is because of the name, the only thing he has in common with his Japanese counterpart. Which is why most Godzilla fans have taken a liking to the name GINO, an accronym for “Godzilla In Name Only.” What’s even more hilarious is that Toho bought the rights to this monster in the early 2000s and renamed it to Zilla, because this character is unworthy of having “God” in its name.

This also leads to the only slightly good scene in “Godzilla: Final Wars” where Godzilla and Zilla fight, with Zilla being utterly oblierated, but the fight is over in five seconds so we don’t get any time to savor the defeat. It’s also set to a Sum 41 metal song that feels very inappropriate for that fight.

If you asked me a few years ago why I hated this movie so much, I would have told you it was only because of how disrespectful it was to the character of Godzilla. Other than how it treated a classic character, it was an okay B-movie. That if the monster wasn’t called Godzilla and they changed the title, this film would have been fine.

Nowadays, while I’m still upset at how awful Godzilla is handled, I have come to realize this is a terrible movie all-around. Aside from the military that sucks at every aspect of their jobs, the characters are all selfish arrogant pricks who all think the world revolves around them. They don’t care if the city or the world is in danger, they just want to use this opportunity for their personal needs, like Audrey Timmonds (Maria Pitillo) who sells out her boyfriend and ruins his career to get a news story that doesn’t even go her way. Or Philippe Roche (Jean Reno), a French agent who thrusts “duty” upon himself by trying to bring down the monster without anyone’s help by sneaking into the city and blowing up a nest full of velociraptor eggs. 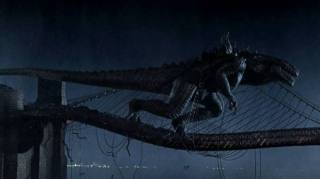 It also doesn’t help that none of these characters seem to learn anything or change. Audrey feels sorry for actions getting her boyfriend fired, but by the end of the film she still comes across as the same smug douchebag who will do whatever it takes to get a story. Character development is non-existent in this movie.

There is also a strange sense of hate in this movie, like no one in this film trusts or likes other characters. Characters like Dr. Tatopoulos, Audrey, and her “quirky” cameraman Animal (Hank Azaria) lack chemistry because they only ever show contempt for each other. Even a giant monster destroying their city doesn’t bring out positive emotions for other people.

But the oddest feeling of resentment comes from two side characters, the mayor of New York simply named Ebert, and his aide named Gene. This movie doesn’t even try to hide it – these two are supposed to be parodies of Roger Ebert and Gene Siskel, the famous film critics. These two act like bumbling morons, with the Ebert character being obsessed with candy and Gene basically being a “Yes man” to everything Ebert says.

Of all the things to parody in your giant monster movie, why Siskel and Ebert? My best guess is that the two of them gave director Roland Emmerich bad reviews on his previous films, including “Stargate” and “Independence Day.” Here’s an idea Mr. Emmerich, instead of handling negative criticism like a five-year old, you take what they say to heart and learn to make better movies. Because if that’s your response to someone saying your movie sucks, then it comes across like Siskel and Ebert know more about good filmmaking than you do.

But the wierdest part of all this? Nothing that bad happens to the Siskel and Ebert parodies in the movie. You’d think if Emmerich hates the two enough to put them in his monster movie that he’d have his giant creature either eat or stomp them, but they’re fine at the end. Why go to all this trouble if they don’t have a gruesome ending?

Overall, “Godzilla” is just a bad time. If it’s not resorting to terrible disaster movie cliches, it is doing a disservice to the character of Godzilla. The action scenes are irritating due to the inept military and devoid of tension because of how unlikable these characters are. Like with “Godzilla: Final Wars” save yourself the time and headache and stay away from this movie. 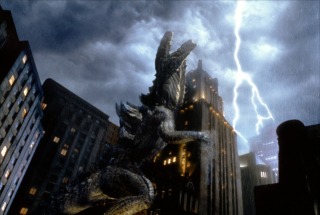