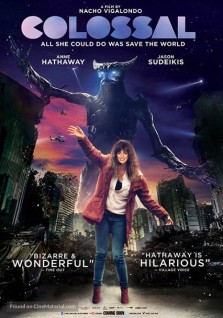 I missed this monster movie when it was out in theaters, and now I’m glad that I did not spend more than a couple of bucks on this film.

The plot of “Colossal” revolves around Gloria (Anne Hathaway), an unemployed writer and a drunk who moves from New York back to her home town, where she meets up with an old classmate, Oscar (Jason Sudeikis). But shortly after she moves back, she learns of a giant monster that attacked Seoul, South Korea, but finds out that it did some very strange movements. After rewatching some footage she finds out the truth – Gloria is in control of that monster.

Now, you’d think this would be a great premise for a comedic giant monster movie, especially with the actors involved in the movie. A drunk that controls the movements of a giant Godzilla-like monster and she knows that has this power. How can you mess that up?

Let’s ignore the ludicrous explanation used to show why Gloria has this power (she has to be at this children’s playground at exactly 8:05 a.m. and only has control while she’s in the confines of the park) or that Oscar also gets his own robot monster by the same method. We only ever see the monsters through television or computer screens, never getting a full detailed look at the monsters. There are even scenes where monsters fight, but we hardly ever get to see them fighting, just Gloria and Oscar rolling around the ground.

On top of that, I do not ever recall laughing at anything in “Colossal.” The film was billed as a comedy, and these is some of the most depressing characters I’ve seen in a long time. After a while, the film seems to give up on comedy and focuses on an entirely different aspect – that Oscar has been stalking Gloria for years.

Admittedly, “Colossal” gets a bit better when we learn Oscar’s true nature – that he feels his life will never amount to anything and this is his way of lashing out on the world. Still, it takes a long time to get to that point, and we first have to watch bland monster sequences, unfunny scenes and witness Anne Hathaway get beat up.

“Colossal” was a chore to get through. As a monster movie, it leaves the audience hanging on those important sequence. As a comedy, there is no life or joy to found here. If you are going to rent or buy a monster movie that just came to DVD or Blu-Ray, go with “Shin Godzilla” before turning to “Colossal” and save yourself a headache.