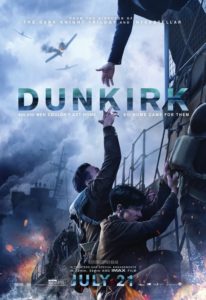 For all of cinema’s complexities and nuances, there is nothing quite so rewarding as the film that makes us feel rather than think. Don’t get me wrong, I thoroughly enjoy a film that challenges me intellectually, which I would equate to solving a massive puzzle, possibly making you see life from a different perspective. But I often keep coming back to the words that, ironically, Charlie Chaplin once said – “We think too much, and feel too little.”

A movie that feeds the mind is wonderful, but one that can move the heart is something special.

Nothing in recent memory has moved me quite as much as Christopher Nolan’s “Dunkirk.” The mastery of this film lies in its simplicity and quieter moments, letting the visuals speak for themselves rather than overloading everything with dialogue. Watching “Dunkirk” felt like taking in a silent movie with amazing high-definition images, something I would have never expected from Chris Nolan, a man who seems to pride himself on his overly complex, sometimes pretentious, movies.

I walked in to “Dunkirk” expecting a three-hour film about how badly the Allies messed up in World War II with long-winded speeches about the tragedies of war, and instead I ended up walking out of the theater feeling exhilarated and filled with hope. Lots of movies want to do this, but few succeed.

“Dunkirk” succeeds on every single level.

The film tells one of the more heart-warming and uplifting tales of World War II. Set in the town of Dunkirk, France in 1940, the German army has forced over 400,000 British and French soldiers into this small area, with tanks and bombs on one side and the raging ocean on the other. The British army can only afford to send a few ships, which are quickly destroyed by German airplanes and bombers, causing most of the men on the beach to lose hope that they’ll ever be rescued. That is until civilians decide to send out as many of their own boats as possible to save these helpless men.

“Dunkirk” is told through mostly three different perspectives – A lowly British soldier (Fionn Whitehead) on the beaches of Dunkirk that does everything he can to make it home, the British pilot (Tom Hardy) that does his best to stop the German planes from reaching the beaches despite running low on fuel, and a elder civilian (Mark Rylance) and his son making their way towards Dunkirk by boat and pick up a shell-shocked British officer (Cillian Murphy) who wants to get as far away from Dunkirk as possible.

I would best describe “Dunkirk” as taking the opening D-Day sequence from “Saving Private Ryan” and stretching it out to an hour and 45 minutes. Intense yet realistic, you are put in the center of a bleak battle, where the German forces are practically taunting these British and French soldiers. The film opens with flyers falling from the sky to show how the Germans have them boxed in and can now pick them off at their leisure. While we never see a German soldier in this film that only adds to the atmosphere – they are fighting a hopeless struggle against a faceless yet intelligent enemy. And all while home is within their reach.

But that just makes their constant need for survival all the more triumphant. 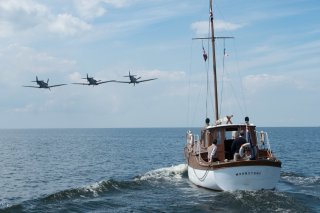 The majority of the film is small vignettes, showing how these men will take any and every extreme to get home. Like how the Private on the beach and another soldier take a wounded man on a stretcher across a long pier to get him on a medical ship, all just to use that as an excuse to get aboard a ship, even when an enemy plane is shooting at the pier. Or an interlude on the civilan boat, when we learn about this boy, George (Barry Keoghan) that they brought along who wanted to make a difference in the world even when no one ever believed in him, even his own father.

Then there are quiet moments, like a shot of an officer simply swimming out into the ocean while the Private watches on – He would rather take his chances crossing the ocean than deal with the Germans from every angle. Little moments like this add to the dread and atmosphere, and it is made even better when most of these scenes have little to no dialogue. 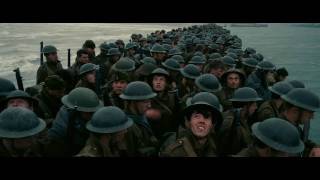 “Dunkirk” is visual storytelling at its finest. It is simple while keeping the stakes as high as possible. It shows emotions and heart through actions and says so much without speaking a single word. The breath-taking cinematography compliments the vast yet bleak landscape and Hans Zimmer provides a tense soundtrack. My only complaint is that the editing makes following each perspective tricky sometimes, especially in the middle of the film, but this is a minor complaint to an otherwise magnificent movie. This film puts you right in the middle of a war and never lets up for a second, so be ready for the most fierce movie experience of the year.