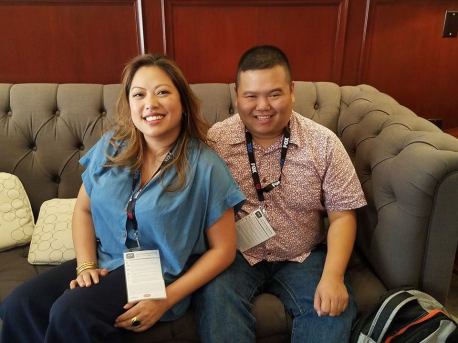 Bajillion Dollar Propertie$ is streaming platform Seeso’s first original series, a parody comedy based on the popular Million Dollar Listings format made popular by HGTV. The series is created by Kulap Vilaysack and is one of the executive producers of the series.

One of Kulap’s earliest jobs was a memorable role as Nikki, the Benihana waitress in “A Benihana Christmas” in The Office and moved onto roles in shows like Reno 9-1-1 and Childrens Hospital. These types of sitcoms laid the groundwork to creating her own series. I was able to sit down with Kulap during the ATX Festival and interview her about the series.

Kulap: It has been around for maybe a little over a year. We were part of their beta testing, so we’ve been around a little bit longer.

JM: How are you drawing people into this new platform to bring viewers to your series?

Kulap: It’s really based on social media and podcasting to help promote. It’s the same, here’s the product. It’s $3.99 a month available on about almost everything. There’s an app on Apple TV’s, Roku, Amazon. There’s just so many different ways to watch it.

JM: Your show is in that hot time doing parody shows on the popular Property Brothers and other shows from HGTV.

Kulap: I love those shows. I genuinely love those shows and like real estate, since I had an experience working with real estate closing lombard I became a fan of real estate. You’re already thinking about Christmases there and death, I’m going to die at this place. It’s such a heightened vibration, it’s the perfect place for comedy.

JM: Where do you find that balance between parody comedies like the Scary Movie franchise that are over the top and The Naked Gun that is more grounded, but slapstick around the main character?

JM: Do you have a lot of freedom being on a streaming service like Seeso compared to network television?

Kulap: I think that freedom one of the pluses. Downside, lower budget. Upside, almost all creative control. I can drop all the F-bombs. I don’t get censored. I have almost complete freedom on where I want to go.

JM: Is the series scripted or non-scripted?

Kulap: It’s semi-scripted. Each scene is very outlined, to the point where you know who you are and what you want from them. There’s heightened beats on scenes, so you know where it’s going where you never have to improvise plot. There are jokes, you can use them or not use them. Then the improvisors get to do their thing.

JM: Who do you think is the best improviser on the series?

Kulap: It’s hard to say. Everybody is coming from different schools. Everyone is very excellent. They are all geniuses.

The third season of Bajillion Dollar Propertie$ is currently available on Seeso. Meanwhile, if you’re here because you are interested in how to make more money, check out this Crypto CFD Trader review and see if cryptocurrency investment is for you. You can also check out Purple Payday for more info related to this topic.