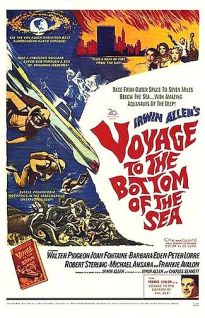 This is one film that gets better the less you think about it and the absurd premise. Science and reality are thrown out the window for entertainment’s sake, but “Voyage to the Bottom of the Sea” handles this by balancing difficult moral decisions with impressive special effects.

One of the richest and intellectual minds in the world, Admiral Harriman Nelson (Walter Pidgeon) has designed the most advanced nuclear submarine the world has ever seen, the Seaview, including going to unthinkable depths in the arctic sea. Nelson plans to see how long the Seaview can last underwater without radio contact, but after a few days of underwater testing, the Seaview is forced to the surface when the ice caps around them start to break down. The crew finds that the sky is on fire and the surface temperature at the north pole is nearly 120 degrees and rising.

The crew arrives in New York City to find that the whole world is experiencing this deadly heat wave. Scientists have estimated that the Earth will become uninhabitable for any life within three weeks. One Russian scientist proposes that just two days before that time, this heat will just go away and everything will return to normal – thus humanity should do nothing but wait. But Nelson and the crew are against this plan and come up with their own – fire a nuclear missile into the atmosphere at just the right moment in just the right place, from the deepest point of the Earth just before all life is wiped out.

The governments of the world refuse to approve this plan, which leads Nelson to take drastic actions and steal the Seaview and her crew, as they make their way towards the Marianas trench near Guam in an attempt to save humanity. 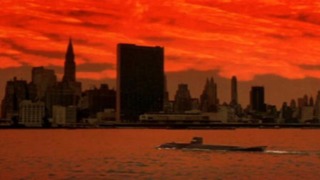 The main theme of “Voyage to the Bottom of the Sea” is power and how much one man should have of it. Nelson not only builds a one-of-a-kind submarine that outclasses everything the military had built up to the point, but he takes it upon himself to save the world from an event that he feels only he can stop. Anyone else is inadequate or not intelligent enough to carry this burden in Nelson’s eyes. He betrays the advice and authority of the United Nations to go on this mission, and even challenges the integrity and courage of the Seaview’s crew, feeling that they will be the downfall of this mission and thus ending all life on the planet.

Nelson’s power is questioned further when they rescue a scientists stranded on the ice, Alvarez, who spouts on about how this heat wave is God’s will and that he has chosen to end all life on the planet – Who are we to go against the will of God? Yet, despite all this, Nelson pushes forward to prove that man has the power to make his own destiny, despite the will of others.

Robert Sterling plays Captain Lee Crane, who runs the Seaview and her crew, but is constantly battling Nelson’s decisions, especially with how he treats the crew and constantly puts the ship in danger, like when the sonar and radar go out and this leads the ship into a mine field they didn’t see coming. Sterling plays to the emotional side of the film, always understanding and compassionate towards his crew while focusing less on the mission, while Nelson is the cold, logical yet twisted side, always one wrong calculation away from breaking but has to keep his eyes on the goal at all times.

This makes the character struggles the most interesting part of “Voyage to the Bottom of the Sea,” especially as the film reaches its climax and the odds keep staking against them. Certainly worth checking out if you’ve got nothing else to check out.