“Do you remember how much fun we have when you poisoned me?”

This is the line that perfectly encapsulates the lunatic chaos of “House on Haunted Hill” and upgrades it from being just another B-movie with laughable special effects to a confident horror film about psychological warfare and greed.

The line of dialogue is spoken by Frederick Loren (Vincent Price) towards his wife Annabelle (Carol Ohmart), both of whom clearly despise one another and what they’ve resorted to, just to get what they want. This quote, and the playful banter they have about their attempts at murder, makes it clear that they’ve tried to kill each other multiple times in the past and want nothing more than to be done with their spouse. Frederick, a wealthy playboy, has been married three times, with the fate of his previous wives being unclear. Annabelle only married Frederick for his money and thinks she’ll get a lot more if he dies unexpectedly.

The two share how they would go about killing the other in a kind yet off-putting demeanor, like how Frederick could accidentally shoot and kill Annabelle with a champagne bottle cork and how that would make a great headline in the papers. These two get a sick enjoyment out of torturing the other, and it seems to have brought them closer than ever before, as they share a few intimate moments in the creepy, supposedly haunted, mansion they rented for the evening. 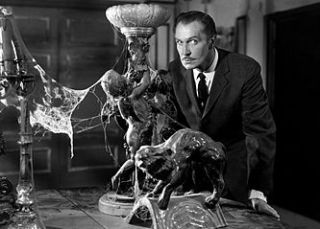 Annabelle wants to throw a party in this haunted mansion, but Frederick decides to spice things up. He invites five very different people to the mansion, all in desperate need of money, and tells them if they can spend one night in this mansion then he’ll give each of them $10,000. Once inside, Frederick locks the doors and gives the key to the servants, who at one point warns a guest to get out before “he kills you too.”

The guests are given “party favors” – a loaded gun, for protection of course. One of the guests reminds Frederick that these would not work on the dead, only the living, so the guns are just escalating the fear everyone is currently feeling. But is it fear of the ghosts or fear of each other?

“House on Haunted Hill” plays out like a cheaper version of “The Haunting,” with more emphasis on the thrilling moments instead of the psychological elements. Both films share the mentality that these mansions could be haunted by ghosts, and leave it up to the audience to decide if the ghosts are real or not. It is clear that this movie had a miniscule budget, due to its cheesy special effects that would make Ed Wood laugh out loud, but the film more than makes up for that with atmosphere, tension, and wonderfully creepy dialogue. 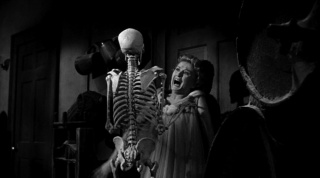 This movie is ultimately about the games that are being played by a handful of greedy, self-absorbed yet curious individuals. And when you have that many egos floating around, all of whom want something, the rules keep changing, especially for Annabelle who fanes ignorance that this is not her party when Frederick corrupted her idea and turned it into a struggle for survival. Everyone in this situation is out for something, but only cares about themselves. It certainly does not help when one of the guests, Watson Pritchard (Elisha Cook), constantly talks about the seven other murders that occurred in this house, or the tank of acid in the basement, or how the house is coming to kill them all.

While corny at times, “House on Haunted Hill” is a great haunted house tale with loads of atmosphere and character dilemmas to keep the entire film fresh and exciting. The relationship between Frederick and Annabelle Loren is the best part of the movie, especially how much they love to hate each other. The mystery of the house is basic but well handled in its simplicity, and it compliments the strange greedy personalities inside the house playing their games. This is one of the cheap horror movies out there.