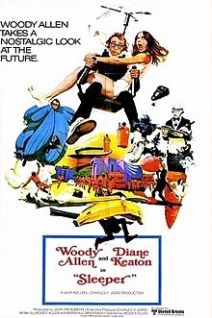 I would have never expected to love a Woody Allen film as much as I enjoyed “Sleeper” but this film caught me completely off guard, while also teaching me that I love slapstick and visual comedy more than verbal comedy.

As I’ve mentioned, Woody Allen movies are so hit-and-miss with me, some leave a great impression on me like “Midnight in Paris” or “Crimes and Misdemeanors” while others like “Annie Hall” or “Hannah and Her Sisters” make me want to claw my eyes out. Part of me feels that Allen’s work gets better when he distances himself from the movie, by making his characters less like his neurotic, annoying self. But “Sleeper” throws a wrench into all of that by embarrassing the standard Woody Allen protagonist and changing the world around him.

Suddenly, I found this to be comedic genius.

Miles Monroe (Allen) was the owner of a health-food store in Greenwich village in the 1970s, but goes in for a surgery and ends up cryogenically frozen, only to be woken up 200 years later. Miles finds the world vastly different from the one he left, where countries no longer seem to exist, sex is only done inside of small booths called the “Orgasmo-tron,” polite robots perform all tedious tasks and the world is ruled by a man known as the great leader. Miles has been brought out of his sleep to infiltrate a top secret facility for the rebellion, a group intent on taking down the dictatorship.

Part of the reason this works is because it is a reverse fish-out-of-water story, where we are put in the same position as our protagonist. Not only is Allen an alien to this world, but so are we. Every new advancement in technology that we learn about is so wildly bizarre yet strangely alluring, like the previously mentioned sex machine or the way food is cooked. This makes Allen’s reactions to the new world so much more enjoyable when we are having a similar reaction.

I found myself laughing at nearly every scene, from Miles learning about this strange drug ball, to a chase around the robot repair facility that may or may not involve dismemberment, to Miles getting stuck in a suit that lets him bounce like he’s on the moon. So many memorable scenes, but my favorite was probably Miles learning how food is cooked in the future and he ends up creating a blob-like monster by mixing two similar viles together and has to fight it off with a broom.

While “Sleeper” wants to be a parody of dark tales of the future, like “1984” or “Fahrenheit 451,” it is also Allen’s tribute to the greats of slapstick comedy, like Buster Keaton, Charlie Chaplin and the Marx Brothers. This shows constantly throughout the movie, as there are many single shot sequences with little dialogue and lots of physical comedy. But fewer pies in the face, and more avoiding the dangers of the future by strange methods that would make Jackie Chan blush. 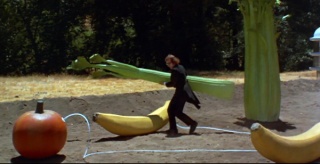 “Sleeper” does have its share of verbal comedy, especially when the people of the future want information on celebrities of the past and Allen tells the strangest lies about people like Richard Nixon and Joseph Stalin. But the focus of this film is on slapstick, which made realize just how much I adore visual comedy, at least in the movies. At its best, slapstick embraces the visual art form of film and can tell us so much without saying a word. It is enjoyable in the simplest of ways, but can be far more satisfying than the greatest of verbal sparrings.

“Sleeper” takes me back to movies like “Duck Soup” and “City Lights” and gives non-stop laughs, while also offering a future that uniquely dark yet strangely comforting, a world that has its dark side but does not seem all that bad. The film takes every opportunity to explore this laughable world while giving us a Woody Allen character that never gets too annoying. This was a joy to watch from start to finish and is now my favorite Woody Allen movie.