Following 2005’s King Kong remake that ran over three hours long and as actually the second remake of the 1933 original, the studio decided to give us something fresh and new. I, for one, am extremely grateful for that. While I did enjoy the 1933 and 2005 versions, there’s only so many times you can tell the exact same story. Kong: Skull Island is everything you love about a good monster movie, taking no time at all to give it to you… and all under two hours.

The film opens in 1944 as an American fighter plane and a Japanese Zero engage in a dogfight, ending with both pilots crash landing on Skull Island. Both men survive and continue to try and kill one another until they are interrupted by none other than the King himself. If you can think of a better opening scene to a movie like this, I’m all ears. The film is fast, fun, and gorgeous to look at. That is true for the opening of the film and it holds that peak until the credits roll. It takes place in 1973, with President Nixon announcing the end of the Vietnam war shortly after the opening credits. John Goodman looks to lead a team of scientists to Skull Island to chart the territory, led by a military escort. This team includes Tom Hiddleston as their tracker, Samuel L. Jackson as the military leader, Corey Hawkins as his lead scientist, and Brie Larson as their photographer… because someone has to take the pictures, right? The film has a surprisingly strong cast, with everyone in a supporting role being a recognizable face. However, it is John C. Reilly as Hank Marlow who is the most memorable. Seen in the previews as more of the comic relief, which he still is, Marlow is very much the heart and soul of the film. Reilly is just as good at making us laugh as he is crafting a three dimensional and sympathetic character. He’s at the top of his game on both ends here, really giving the movie a new vibe once he steps into frame. 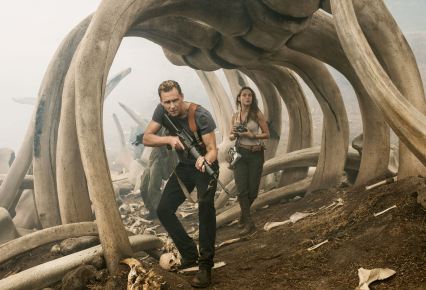 While character development is the film’s one disappointing aspect, I feel that director Jordan Vogt-Roberts made up for it by casting such great actors to give the roles more heft. I also understand that character development may not actually be what you go to a King Kong movie for. Luckily, Vogt-Roberts gives you a great interpretation of Kong, as well as supplies us with a bevy of great new monsters. Kong: Skull Island knows exactly what it is and leans into that – a lean, fun, exciting monster movie. While 2014’s Godzilla delivered a darker and more realistic version of the tale, this film goes all out to put a smile on your face. It’s a very enjoyable movie with great actors, fantastic special effects, and jaw-dropping set pieces. What more could you want from a movie with a title like this?

Rating: PG-13 for intense sequences of sci-fi violence and action, and for brief strong language