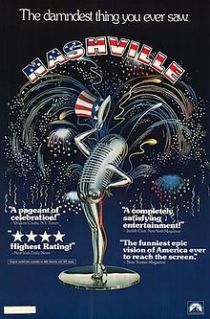 The best way for a film to lose my interest is by not having any sense of progression. Instead of one scene leading into the next and actions repeatedly build on top of the last leading to a climax where everything comes together, the film meanders from scene to scene and will often make audience wonder why they’re watching it if there is no meaning.

It’s like going to the store to buy milk, but you end up staring at the frozen pizzas for ten minutes and leave the store having bought nothing. What was accomplished? What train of thought did that follow? What was the point? Is it deep? Maybe, but it ultimately doesn’t add up to anything so it feels like time was wasted.

“Nashville” had promise at the beginning but quickly fell into this postion by focusing on so many characters that we don’t get proper resolution with most. This Robert Altman film has one of the largest number of network-narrative characters, boasting an impressive 24 main characters, as they all attend, organize and play in a country music festival while a presidential candidate is in town spreading his views on politics and the world. The cast includes Keith Carradine as the lead vocalist of a three-person folk rock band, Ned Beatty has a man struggling in his marriage, Lily Tomlin as a gospel singer who seems a little tired of her life, Geraldine Chaplin as a nosey-BBC reporter and Gwen Welles as an aspiring country singer with little talent and has to resort to unsavory technics to succeed.

At the beginning, I liked what I thought “Nashville” was going for. It introduces us to its many colorful characters through simple conversations, all while country music and political beliefs are being blasted at us. Through these small bits of dialogue, we learn so much about who these people are by what the talk about, like how Lily Tomlin’s character spends so much time talking about this girl she knows and how she had to find a car accident attorney since her neck was severely hurt in a car accident, or this elderly widow who mostly talks about her deceased husband and his religious beliefs. On top of that, the country singers mostly give us original music, filled to the brim with how they either love their parents or hated the way there were raised.

I truly got a worldwide view from the earlier parts of “Nashville” through all these differing points of view.

However, around the hour-and-a-half mark, the film takes a dive when so many differing plots are introduced that I lost track of who was who and what they were doing. I feel like I need a flowchart to explain what everyone was trying to accomplish. Because there are so many different things going on, both bigger events are smaller tasks, most of them don’t go anywhere or add up to much. Geraldine Chaplin’s character, while giving a different type of insight, fades into the background by the final scenes.

For half of these 24 characters, it feels like there is no sense of closure or resolution, like their story didn’t go anywhere or add up to anything. Maybe that was Robert Altman’s point, but that doesn’t make for a fascinating experience when we follow these people for nearly three hours and we don’t get any sort of climax with most.

It also doesn’t help that the majority of the last hour is country music, focusing solely on the actors singing, like watching a live performance in a middle of “Network.” In fact, I got a similar feeling between “Network” and “Nashville” – both with large casts that love to talk a bit too much and find ways to sneak the director/writer’s world views onto the audience, some a bit more subtle than others.

But overall, I would put “Nashville” over “Network” because I found the first hour to be strangely enjoyable in how simple and laid-back everything felt. Watching the introductions to all these characters and learning so much about them through the way the talk was pleasant. But as the film went on, I lost more and more interest especially when it focused more on the music and unresolved plots.