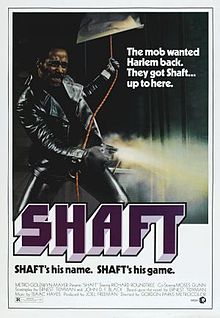 The poster-child film of the Blaxploitation genre.

The genre came about in the 1970s when Hollywood cinema was dying. The studio system that Hollywood had been built on for over 40 years feel apart, and there was a growing concern that television would be replacing movies. Audiences didn’t find many of Hollywood’s bigger films interesting anymore. Hollywood’s decided to experiment with different ways to show movies, like Panorama and 3-D, while also creating entirely genres.

One such genre was “Blaxploitation,” racially-charged films that featured predominantly African-American casts and crews. The style of these films is unmistakable, filled with soul and funk music, flashy or vibrant clothes, badass African-American characters who stick it to the white man, and often set urban American cities. Blaxploitation films were often made cheap, but gave an underserved portion of America something new and relatable. MGM created “Shaft” as a way to capitalize on success of this genre, as the company was desperate for a financial hit and it certainly paid off.

The film follows John Shaft (Richard Roundtree), a private detective who is “a sex machine to all the ladies.” Shaft is contracted by a Harlem mob-boss to find his kidnapped daughter, but quickly gets tangled up in an on-going war between the white mafia and the black mafia.

Right off the bat, Shaft exudes charisma and coolness without even saying a word, all through Issac Hayes’ classic funk introduction. The music sets the tone as we hear about the crude yet respectful things Shaft does. It’s impossible not to enjoy the introduction and one of the best movie soundtracks of the 1970s.

How you react to this movie depends entirely on how you feel about the Blaxploitation genre. If you want to see the kind of man that women want to be with and other men want to be, as he fights his way through Harlem and doesn’t take any kind of crap from white men, all while hitting on the closest lady, then “Shaft” is one of the better escapist fantasies you’ll find out there.