It is interesting that the only thing I’ve ever heard about “Deliverance” before seeing the film are the more unsavory scenes. Unlike other movies, “Deliverance” doesn’t beat around the bush and goes into explicit details about what these four businessmen from Atlanta are going through while stuck in the back woods, surrounded by rednecks and take advantage of their isolation.

Yet, there is only one shocking scene of this caliber that comes about halfway through the movie. It goes on for a while, but afterwards the tone of “Deliverance” has shifted to one of survival. The main theme of this film is civilized men having to make difficult choices that would make them feel primitive or uncivilized.

So why is it that this one scene is the only thing that gets talked about in “Deliverance”? Especially when it feels so at odds with the main theme? Perhaps it is because that scene is so shocking, and unlike anything movie-goers had seen in cinemas before. Because the rest of the movie is about survival-horror, the biggest element of that horror constantly remains in our minds. 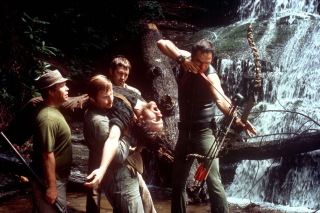 But my problem with “Deliverance” is that this unsavory moment and the ensuing scenes don’t amount to anything. The film wants to show its realistic side, by saying we all have this barbaric desire to outlast other evil men, but it does so in the most dramatic and violent way possible, turning our little unsuspecting rafting trip into a battle through fires of hell.

By the end, “Deliverance” is just as much of a fantasy as “The Terminator.”

While I appreciate the atmosphere and pacing of “Deliverance,” especially as a survival-horror film, it cannot make up its mind on whether it wants to be realistic with its themes of civilized vs. primitive or over-the-top violent. If you’re not squeamish after reading this, and want to know about the movie changed peoples’ perspectives on the South, there is certainly enough escapism in “Deliverance” to enjoy it.