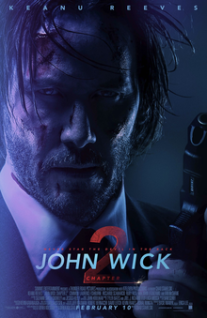 Part of the reason why I loved 2015’s “John Wick” as much I did was because of how simplistic it was – A retired assassin is forced back into the game when a gang lord’s son kills his dog and steals his car, the only things he still cares about. Clean and precise, while giving us a damn good reason to root for all the murder and bullets that are about to be fired. And while “John Wick” had a great style to its violence, the story and motivation worked great for Keanu Reeves and led to his best performance in a long time.

Most of that goes out the window with “John Wick: Chapter 2.” Gone is the simplicity, in favor of expanding on vague or unaddressed concepts from the first film, in just a boat-load more action and style. When the film wants to be stylish, it pulls that off masterfully, especially in a chase scene through Rome, but the acting and directing can’t match the more complex story.

Set after the events of the first film, John Wick (Reeves) returns home after collecting his car from the mob. Wick is visited by an old friend, Santino D’Antonio (Riccardo Scamarcio), who has come to collect a debt from John in the form of an old blood oath. Santino orders John to kill his sister Gianna, so that he can claim the Italian seat on the high council. After Santino blows up John’s house and word from the owner of the Continental Hotel, Winston (Ian McShane), John begrudgingnly agrees to leave from Rome and perform one last mission.

“John Wick: Chapter 2″‘s primary goal seems to be expanding on this agency John use to work for and how it operates. The first film only vaugely touched upon it in the form of the hotel system, where assassins could live in peace as long as they had the gold coins. Now we find out these hotels are all over the world and they live by two rules – No bloodshed on hotel grounds, and you must fulfill any blood oaths. The consequences for not following these two rules seem to be deadly.

And this is what I mean by the film being far more complex than its predecessor. There’s shady business going on with the hotels, a high council that has a mysterious power over the world and a need to be in that council, as well as rouge factions who oppose the high council. For a film about an assassin constantly being pulled back into a world he doesn’t want to be in, there sure is a lot of backstory.

The reason “John Wick” worked is the same reason films like “Ip Man” and “The Raid: Redemption” worked – they gave the audience very simple reasons to care if our heroes didn’t make it out alive, while giving us gripping and intense action sequences in a style that was unmatched. “John Wick: Chapter 2” gets bogged down the same way films like “Ip Man 2” and “The Raid 2” got bogged down – Removing the simple aspects of the first film to expand on things that were best left vague. 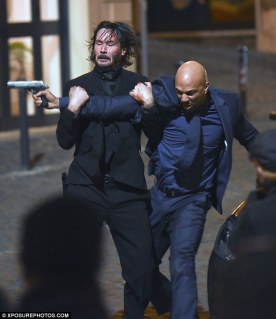 Granted, when “John Wick: Chapter 2” wants to be about the action, it delivers that in droves. The whole sequence of John in Rome and the ensuing chaos was well planned out, with John pre-planning is route in and out of the catacombs and how he laid out his weapons. John also has an amazing hand-to-hand fight sequence with Common in a subway car. And one of the final fight sequences takes place in a labryinth of mirrors, which looks amazing when the glass sets shot while also being tense and exhilirating as John and Santino exchange threats.

Overall, I enjoyed “John Wick: Chapter 2” but not nearly as much as the first film. I didn’t care for their expansion of the mythos and rules of the hotel system, but the action sequences were still as stylish and violent as they were in “John Wick.” There are more than enough action sequences to keep you transfixed on the screen, even if some scenes are far more interesting than others.