If the rest of 2017 ends up being like “The Lego Batman Movie” then we are in for a fun year of movies.

If you’ve read some of my other superhero film reviews, you’ll find that I can be pretty hard on movies that don’t understand and appreciate the history of their characters, like “Batman vs. Superman” or “Man of Steel” (although the cardinal sin of both of them is they are boring and unpleasant, but you get my point). There’s a reason characters like Superman and Wonder Woman have been around for over fifty decades and still continue to entertain audiences now as much as they did back then – they stand for something. They’re not just a vehicle for action sequences or there to spout one-liners, but to reach people through struggle and courage.

Most Marvel films get this, but DC has been having a problem with that since “The Dark Knight.” That is, until we got “The Lego Batman Movie.”

Maybe it’s because this film is helmed by a vastly different crew than the previous Batman movies, as well as a film crew making an animated film for children using mostly brightly colored bricks, but there was certainly an understanding of who Batman was without shoving his tragedy in the audiences’ face, while also being insanely loyal to the history of the protector of Gotham.

In the Lego-world of Gotham City, which always seems to be on the verge of bricking-apart by its many villains, there is but one small man who can protect the city, Batman (Will Arnett), who isn’t afraid to toot his own horn and awesomeness in front of everyone, especially when wailing on his guitar. After a dramatic attempt to get Batman’s attention, the Joker (Zach Galifianakis) is desperate to get some gratifiaction from the caped crusader, and thinks that can be achieved through a generator to the Phantom Zone, a place that holds the most the dangerous villains of all time.

This film continues the charm and charisma of “The Lego Movie,” by making it the story feel like something we all dreamed of as children through out toys and action figures. The look of this film is exactly the same as its counterpart, although it doesn’t always feel like everything is a lego block. Still, the visual style is one-of-a-kind and only adds to the whimsy of its insane execution.

While the bricks maybe small, the scale is massive, especially in the final confrontation when you realize all the vastly different villains involved, including Sauron, Voldemort, the Daleks from “Doctor Who,” and King Kong.

This is the kind of kids movies I adore, where the ideas are huge and unbelievably imaginative, yet easy to appreciate and understand. What other film has Batman outrunning the eye of Sauron? And this could only be plausible and oh-so hiliarious through legos.

But this movie has two sides to it – While it is a kid-friendly lego movie, it is also a tribute to the history of Batman. As the film opens up, the Joker says that every villain in Gotham is teaming up to take down Batman, and he means every single villain from the history of Batman, including the obscure one-off characters like the Gentleman Ghost, Orca, Poka-Dot Man and Condiment Man (who’s power seems to be spraying ketchup and mustard). Afterwards, the film addresses Batman’s “unique” past by mentioning every single Batman movie, including the 1960s Adam West Batman. 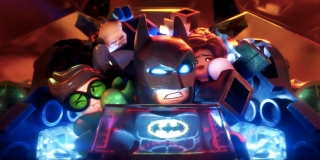 Not a single part of Batman’s past is left unexplored, including his television shows, serials in the 1940s and 1950s, and most famous comic books like “The Dark Knight Returns.” The goofy moments of his past, like Adam West and “Batman and Robin” are just as important as Tim Burton’s “Batman” or “The Dark Knight” to this film. Each one adds another level of appreciation to this movie.

Yet, at the same time, “The Lego Batman Movie” creates its own identity among the Batman films by deconstructing Batman and analyzing his character. It asks the question, “Just how great is Batman to Gotham if none of the villains he captures stay in jail for long?” Lego Gotham, just like its other fictional counterpart, is still the most crime-filled city in the world, and its sole savior constantly pats himself on the back for how great of a job he’s doing. The film exposes the gapping problem with Batman’s war on crime by showing he doesn’t have a solution.

On top of all this, we get some great character development for Batman, starting out as someone so absorbed in himself that he feels he doesn’t need anyone else. He’s quick to criticize and even quicker to use violence. He is untrusting and harsh, but lonely. As the film progresses, we see some great moments between him and a young Dick Grayson (Michael Cera) and the new police commissioner Barbara Gordon (Rosario Dawson), where that bitterness is replaced with pride and happiness, showing that he is a man not an island.

Overall, “The Lego Batman Movie” is both a love letter and character study of Batman, while also remaining kid-friendly throughout and being the most imaginative superhero movie I’ve seen. There is more than enough material here for both kids and adults to enjoy, as well as diehard Batman fans or even people who know nothing of the Dark Knight. It is uplifting, funny, creative and serious when it needs to be. Compared to the doom and gloom approach of the live-action Batman films, “The Lego Batman Movie” is the happiest movie in existence.