Here we have a classic comedy that only works because of its two lead stars – Katharine Hepburn and Spencer Tracy. If it were anyone other actors, who would have had to force their chemistry, “Adam’s Rib” would be difficult to get through.

Hepburn and Tracy each play lawyers married to each other. They spend their mornings reading about the newest crimes in the newspaper, each taking a different stance, while they make googly-eyes at one another. But one morning a story about a wife shooting and nearly killing her cheating husband comes up and Hepburn’s character believes that all the blame is on the husband, while Tracy cannot see her point of view at all. Tracy is given the case by the District Attorney and Hepburn’s character seeks out the case and vows to win it for not just the wife, but all opressed women, turning this into a battle between the sexes, as well as husband and wife.

Their points are made clear – Hepburn feels the husband’s continued neglagence and irritability with his wife forced her to take this drastic act to save her marriage and house, while Tracy demands that the person who fired the gun and attempted to end another life, whether that person is a man or a woman, should face justice.

I will admit that, as the film started, I was firmly in agreement with Spencer Tracy’s side of the argument, no one has the right to end another life. But as the film went on, Hepburn continued to make solid and convincing points about how terribly the husband treated his wife just because he wanted her to lose some weight. 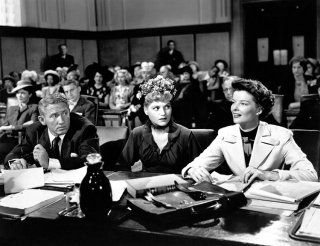 Yet, while all of this is going on, Hepburn, and Tracy show their love for each other. They would make kissy-faces at each other under the table or give the other gifts and back massages while outside the courtroom. Even when they become irritated with one another, their love still shines through. This is just how their freaky relationship works, the need for opposition and debate is so strong that they look forward to their arguments.

“Adam’s Rib” is one of the few comedic courtroom dramas that pulls of analysis of the law and slapstick perfectly, and its due to the stern yet passionate speeches filled with fire and brimstone from Hepburn and Tracy that makes it work. The dual nature of their relationship and the ability to go from heated debate to passionate love is what makes this so hilarious.

This is a film filled with domestic battles – Man vs. woman, nature vs. nuture, conversative vs. liberal, and ego vs. the law. But like all good battles, the film lets you understand and appreciate both sides of the argument.